Famous Nigerian Journalist Killed With Letter Bomb Was A Blackmailer: Revelation By A Nigerian Professor. 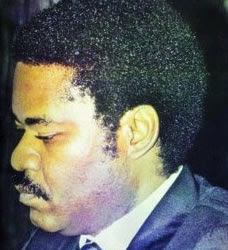 The flambouyant Nigerian Journalist, Mr. Dele Giwa, who was killed on 19th October, 1986 with a letter bomb, believed to have been packaged and delievered to him by an assasination cell inside the then Military Administration of General Ibrahim Badamasi Babangida was a top class blackmailer. This revelation was made recently to a Nigerian national weekly newspaper, "The Nation on Sunday", by a Professor of Music, Taiye Ogunade. Mr. Giwa was the founding Editor-In-Chief of "Newswatch", a widely read news magazine based in Lagos.

Professor Ogunade in the expose, monitored by a chidi opara reports network member, revealed that during the trial of late Major-general Mamman Vatsa for coup plot against the Babangida regime, Vatsa made a four-hour-speech in which he revealed that a certain Chinyere, a friend and business associate of Babangida's wife, Maryam, who goes by the pseudonym "Gloria Okon", had a serious security problem with the Nigeria Customs Service while on an International business trip for Mrs. Babangida, in which she was arrested and detained. The late Mamman Vatsa, a close friend of the Babangida family, was asked, according to Professor Ogunade, to help and fix the problem, whereupon, Vatsa took journalist to a morgue in Kano where "Gloria Okon" was arrested and detained, and showed them the remains of a lady whom he claimed was "Okon", while the real person had been released and had gone to live in London. The Professor claimed that soldiers loyal to Vatsa made a tape of the speech and gave him a copy. The Professor further claimed that he gave the tape to late Dele Giwa, who investigated the story and in the course of investigation, got photographs of "Gloria Okon" and Mrs. Babangida at a ceremony in London. Mr. Giwa, the Professor continued, approached Babangida and threatened to publish the photographs if he was not made minister of information. Giwa, Ogunade said, was boombed within forty-eight hours of that encounter. The Professor of Music, who also spoke to a well known Nigerian news blog based in New York, "SaharaReporters", made other far reaching revelations.

chidi opara reports have not been able so far to unravel the motives behind these revelations, but preliminary checks on Professor Taiye Ogunade revealed that he was a major clandestine operative in the anti-Babangida and subsequently, anti-Abacha movements that emerged after the annullment of the June 12th 1993 presidential election, believed to have been won by Mr. Moshood Abiola, a billionaire, from the Yoruba ethnic stock.
Posted by PublicInformationProjects at 08:16 No comments: