Posted by PublicInformationProjects at 03:17 No comments: 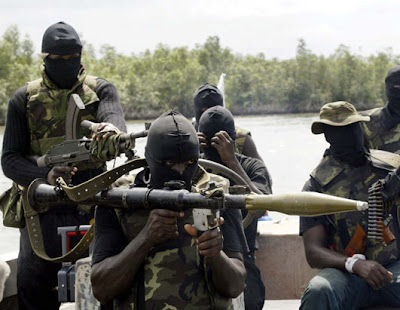 Information reaching chidi opara reports indicate that unless there is a last minute change of plans, the maiden ceremony of weapons surrender by repentant Nigerian oil region militant leaders will take place this morning at the headquarters of the Amphibious Brigade of the Nigerian Army in Portharcourt. The weapons surrender is the first stage in the amnesty proposed for the militants by the Nigerian government. The Amphibious Brigade headquarters is also the operation base of the Joint Taskforce on Security(JTF).

Amphibious brigade headquarters insiders revealed to chidi opara reports that the militant leaders who are to surender weapons today are: Messrs. Tom Ateke, Fara Dagogo and Soboma George. "The weapons surrender ceremony tomorrow is likely to be by proxy", a militant group insider whispered to us yesterday.

We also gathered` that Mr. Dokubo Asari, a repentant militant leader who had a security problem recently is expected in Portharcourt this morning from Abuja in connection with the ceremony. Mr. Asari, according to a contact close to him, is not surrending weapons, but was asked by the Presidency to be available in Portharcourt, "so that things will move smoothly". We were not able to confirm before publication if he will be present at the venue of the ceremony scheduled to begin by 10.00am.

It will be noted that the Nigerian government recently announced its intention to grant amnesty to repentant Niger Delta militants. A committee headed by the country's Minister of The Interior was inaugurated with the mandate to work out modalities for the amnesty. The committee had concluded its assignment and submitted the report to the President.

While there have been purported declarations of intentions to accept the amnesty by some militant leaders from their places of hiding, the main Niger Delta militant group, Movement For The Emancipation Of Niger Delta(MEND) have however, rejected the offer. MEND, in a news release made available to chidi opara reports and some other news organizations, debunked reports that its "senior Commanders", Boyloaf, Fara Dagogo and Soboma George had accepted the offer. The group described the reports as propaganda hatched by elements inside government who had their eyes on the billions of naira budgeted for the anmesty project.
Posted by PublicInformationProjects at 00:22 No comments: