The 33-year-old mother of three, Ri Hyon Ok, also was accused of spying for South Korea and the United States, and of organizing dissidents, a rights group said in Seoul, citing documents obtained from the North.

The Investigative Commission on Crime Against Humanity report included a copy of Ri's government-issued photo ID and said her husband, children and parents were sent to a political prison the day after her execution on June 16.

The claim could not be independently verified yesterday, and there has been no mention by the North's official Korean Central News Agency of her case.

But it would mark a harsh turn in the crackdown on religion in North Korea, a country where Christianity once flourished and where the capital, Pyongyang, was known as the "Jerusalem of the East" for the predominance of the Christian faith.

According to its constitution, North Korea guarantees freedom of religion. But in reality, the regime severely restricts religious observance, with the cult of personality created by national founder Kim Il Sung and enjoyed by his son, current leader Kim Jong Il, serving as a virtual state religion. Those who violate religious restrictions often are accused of crimes such as spying and anti-government activities.

The government has authorized four state churches: one Catholic, two Protestant and one Russian Orthodox. However, they cater to foreigners only, and ordinary North Koreans cannot attend the services.

Still, more than 30,000 North Koreans are believed to practice Christianity in hiding -- at great personal risk, defectors and activists say.

The U.S. State Department said in a report last year that "genuine religious freedom does not exist" in North Korea.

Ri reportedly was executed in the northwestern city of Ryongchon -- near the border with China.

(From Associated Press)
Posted by PublicInformationProjects at 08:05 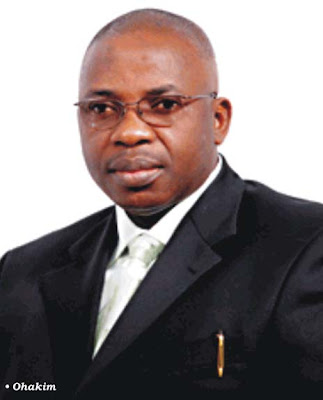 Except a last minute change of mind occure, the governor of Imo state of Nigeria, Dr. Ikedi Ohakim will formally declare publicly his membership of Nigeria's ruling party, the Peoples Democratic Party(PDP) in less than an hour from now. This declaration is the result of discussions between the governor and the national caucus of the PDP. Dr. Ohakim, a former member of the party, decamped to the Progressive Peoples Alliance(PPA), which gave him the platform to contest and win the 2007 gubernatorial election in Imo state. The declaration, chidi opara reports gathered authoritatively would be made at the opening ceremony of the new PDP secretariate along Okigwe road in Owerri by the Nigerian President, Mr. Umaru Yar'Adua.

chidi opara reports' network members in Owerri report that the Imo state capital city is agog with expectation of the Ohakim declaration, which is the main reason for the President's visit. An Imo state government house insider informed one of our network members yesterday at the premises of the Imo state owned Concorde Hotel Owerri that; "the main reason for Mr. President's visit is to personally welcome our governor back to PDP".

Our investigation revealed that although majority of PDP members in the state are happy with this turn of event, some powerful cabals within the party feel threatened by the governor's imminient comeback. chidi opara reports can confirm that there is disquiet in the camp of Mr. Ifeanyi Ararume, the PDP governorship candidate in the 2007 gubernatorial election in the state and in the camps of other potential governorship aspirants. This disquiet we learnt is due to apprehension that the governor may use the advantage of incumbency to get the party's ticket for the 2011 governorship election. Mr. Araraume who recently joined forces with former governor Achike Udenwa's formidable grassroots political platform known as "onongaono", hopes to use that platform to clinch the PDP governorship ticket come 2011. Governor Ohakim is reported to be keeping his next political move very close to his chest.

chidi opara reports does not have details of the Ohakim/PDP agreement prior to today's declaration, unconfirmed information however, have it that the President had insisted that the Imo state helmsman should come back without conditions.
Posted by PublicInformationProjects at 05:10