Ahmadinejad Sworn In As Riot Police Break Up Protests 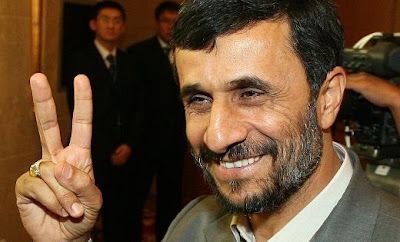 Mahmoud Ahmadinejad was sworn in as Iranian president on Wednesday as riot police broke up opposition protests over an election that triggered the worst turmoil in the Islamic republic's history, AFP reports.
The 52-year-old hardliner took the oath of office for another four-year term at a ceremony in parliament, defiantly vowing to resist "oppressive powers" and saying his June election marked a major change in Iran.
But prominent opposition leaders were absent from the ceremony, and outside riot police and Basij volunteer Islamic militiamen used pepper gas against demonstrators who claim his landslide victory was fraudulent, witnesses said.
"The protesters were chanting anti-Ahmadinejad slogans. The police and the Basijis dispersed them. All the nearby shops are closed," a witness said.
Another group tried to demonstrate nearby but were also dispersed as protesters chanted "God is Great" and booed the security forces.
Wednesday's ceremony was attended by about 240 of Iran's 290 MPs as well as clerics, but prominent opposition leaders including Ahmadinejad's main defeated challenger Mir Hossein Mousavi were absent, as was powerful cleric and former president Akbar Hashemi Rafsanjani.
Ahmadinejad now has a two-week deadline to form a new government that is likely to remain on a collision course with the West, particularly over Iran's controversial nuclear drive.
"We will resist oppressors and try to correct the global discriminatory mechanisms in order to benefit all the nations of the world," Ahmadinejad told parliament.
"The June 12 epic is the start of major change in Iran and in the world."
His re-election set off massive street protests, deadly violence, a raft of political trials, increasing divisions among the ruling elite and further isolated Iran on the world stage.
About 30 people were killed in the violence, hundreds wounded and around 2,000 initially arrested, while around 110 have been put on trial.
Ahmadinejad's presidency was formally endorsed on Monday by supreme leader Ayatollah Ali Khamenei, who described him as "courageous, astute and hardworking."
White House spokesman Robert Gibbs on Tuesday acknowledged Ahmadinejad as the "elected" president of Iran, but stopped short of declaring him the "legitimate" president and said Washington had no plans to congratulate him.
"This means they only want democracy which serves their interests and they don't respect people's votes and rights," Ahmadinejad retorted.
"You should know that nobody in Iran is awaiting your congratulations. Iranians will neither value your scowling and bullying nor your smiles and greetings."
Under President Barack Obama, the United States has made overtures for dialogue with Iran after three decades of severed ties, but Tehran has failed to respond and vowed to press on with its nuclear work.
Amnesty International’s secretary general Irene Khan said Iran, a country of 71 million people, was caught in a spiralling cycle of repression.
Ahmadinejad's inauguration should be "the moment for the supreme leader and those around him to turn the page on the gross violations that have punctuated recent weeks and have been an all too familiar hallmark for many years," she said in a statement.
Khamenei on Monday warned his protege that the "angry, wounded opposition" would continue challenging his government.
He also told Ahmadinejad to heed the views of his critics, in a possible reference to a row between the president and his own conservative supporters over controversial political appointments.
Iran's judiciary chief Ayatollah Mahmoud Hashemi Shahrudi also urged rival political groups to unite, saying: "I hope they do what is best for the revolution, the regime, and Islam and disappoint the enemies."
Ahmadinejad is expected to keep up Iran's defiance of the international community over its nuclear programme which he aggressively pursued in his first stint despite UN sanctions.
Opponents accuse Ahmadinejad, who enjoyed windfall oil revenues in his first term, of mismanaging the economy, stoking inflation, wasting resources and manipulating statistics to cover his failures.
Iran's stance towards close US ally Israel is also likely to harden further during the second term of Ahmadinejad, who has repeatedly said the Jewish state is doomed to disappear.
Israel, the Middle East's sole if undeclared nuclear armed state, has warned it holds a military option to curb Tehran's atomic ambitions.

(From Focus News Agency)
Posted by PublicInformationProjects at 09:47

Following the recent execution in custody of the erstwhile leader of the Nigerian talibans, Mr. Mohammed Yusuf by security forces in Maiduguri, security in major northern Nigerian cities have been placed on "red alert", a competent security contact whispered to chidi opara reports in Abuja yesterday. "We are working round the clock to avert any untoward security situation on friday". Moslem jumat prayers take place on fridays.

We also gathered that some known radical Islamic clerics are under close security survillance. "As I am talking to you now, our operatives are all over major cities in the north", a senior state security service(SSS) contact informed a chidi opara reports network member.

Network members in Kano, Kaduna, Sokoto and Maiduguri reported increased presence of security operatives arround major mosques in these cities. A network member sighted an SSS operative formerly based in Yenagoa dressed like a cleric at the premises of a major mosque in Kano yesterday.

Reliable Presidency insiders revealed to us that a security report detailing plans to mobilize moslem youths after this friday prayers to protest the extra judicial execution of Mohammed Yusuf in major northern cities is already on the President's desk.

A senior police officer who volunteers security consultancy to chidi opara reports informed us that "in security situations like this, fridays are crucial days and the main locations to be monitored are the mosques".

A well known pattern of eruption of violence in northern Nigeria is that on fridays after jumat prayers, radical clerics would lead militant youths to the streets in violent protests.

The murmur in northern Nigeria is that southern elements in the Presidency led by the Vice-president, Dr. Goodluck Jonathan conspired to order the execution of Mohammed Yusuf. The anger, chidi opara reports gathered, is that while militant leaders in other regions are alife and even negotiating amnesty, the life of the leader of the Nigerian talibans was not spared.
Posted by PublicInformationProjects at 01:18 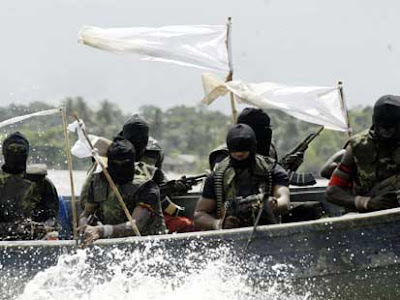 As the hours of the August 6, 2009 Federal Government of Nigeria's amnesty offer draw near, it is important to clarify certain insinuations as well as set the facts straight to counter propagandists and rumour mongers.

It is true that Boyloaf who is a MEND commander in Bayelsa state has expressed a desire to return to civilian life and as such he is in Abuja in furtherance of his personal pursuits. Already, a replacement has been effected to take over his command.

Boyloaf is not acting on behalf of MEND which is already in consultations with the Presidential Special Adviser on Niger Delta, Mr Timi Alaibe.

The outcome of these negotiations will determine MEND's approach to the government's offer.

We deny speculations that Farah Dagogo, our commander in the Eastern Delta is in Abuja for the same purpose as Boyloaf.

Henry Okah will not be leading the Boyloaf led bunch into any kind of talks that will focus on monetary negotiations rather than address the root issues that has led to the Niger Delta unrest.

MEND denies any involvement in a cash for arms deal which we condemn in very strong terms.

When we choose to disarm, it will be done freely; knowing that the reason for our uprising which is the emancipation of the Niger Delta from neglect and injustice has been achieved.

Gbomo Jomo
Posted by PublicInformationProjects at 01:03