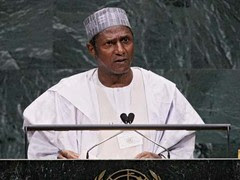 The implementation of the amnesty proclaimed by the President and commander-in-chief of the Federal Republic Of Nigeria for the Niger Delta militants commenced on August 6th 2009, to end on October 6th 2009.

We will like to state here for the purpose of emphasis that what necesitated the amnesty proclaimation was the crippling effects of militancy on crude oil exploration and exploitation, which is the mainstay of the Nigerian economy.

chidi opara reports salutes the vision, broad mindedness and wisdom displayed in the amnesty proclaimation. We also salute the wisdom and courage displayed in its acceptance by some repentant militants. We are using this medium to appeal to all those who have not embraced the opportunity offered by the amnesty proclaimation to return to normal life, to do so without further delay.

chidi opara reports is of the opinion that the meeting is unnecesary and more importantly, capable of being interpreted as an endorsement of militancy by the highest institution in the country, especially by the young and impressionable segment of the citizenry. The Presidency of any country should not engage in activities beneath its hallowed office, like meeting with militant leaders, whether repentant or not.

We recall with regret, the meeting between a militant leader and the immediate past Nigerian President while in office and the boost it gave to militancy, especially in the Niger Delta region. The normal course of action would have been for the repentant militants and their leaders to meet with the committee inaugurated by the government to supervise the amnesty exercise, to strenghten out issues if the need arises.

The meeting between the President and repentant militants have in our opinion cheapened the highest office in the country, and have regretably sent the message across that it is better to be a militant than a hard working professional for instance. If we may ask, how many times does a hardworking Nigerian professional meet with the President?
Posted by PublicInformationProjects at 01:26