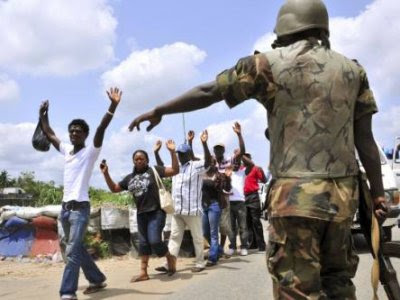 "There are still too many! Bring them down to the spring, and I will sort out who will go with you and who will not"
- God to Gideon (Judges 7:5)

The ongoing amnesty program by the government of Nigeria seems to have achieved separating those who still have the zeal to fight for our freedom from those who were in it for the money.

Today, Saturday, August 22, 2009 that sorting process was again re-enacted in Yenagoa, Bayelsa state where weapons mostly bought by the government were displayed and the boys separated from the men in the circus.

The charade witnessed in Bayelsa is not an indication of success but that of failure considering that the energy put into that event could have been better used in deliberating on the root issues collated in the Niger Delta Technical Committee report which addressed such germane issues from the Willink's Commission of 1958 to date.

In the midst of such sheer deceit, MEND will be compelled to resume with ferocious attacks on the oil industry at the end of our ceasefire on September 15, 2009 to prove that weapons being displayed are mostly government-owned and those surrendering them have not been part of the previous campaigns like Hurricanes Barbarossa, Piper Alpha and Moses that brought the government to their knees.

We have also suspended talks with the Special Adviser to the President on the amnesty, Mr. Timi Alaibe who like the government, expects a disarmament without the real issues being addressed.

MEND will not enter into talks with governors from the region who have tainted the amnesty program with politics and monetary inducements.

Many of the boys who have received money today will at best squander it on material things and what happens next can best be left to the imagination.

Our solemn pledge to the people of the Niger Delta still remains to emancipate the region from the forces that have held it down for over 50 years with divide and rule, monetary inducements and treachery.

Jomo Gbomo
Posted by PublicInformationProjects at 09:47