Apple Says It Did Not "Reject" Google Voice Programme For iPhone

Apple Inc. told federal regulators Friday that it blocked the Google Voice program from running on the iPhone because it alters important functions on the device — yet Apple denied that it has rejected Google's application outright. “Contrary to published reports, Apple has not rejected the Google Voice application, and continues to study it,” Apple said in a letter to the Federal Communications Commission.

The FCC is looking into Apple's block on the Google Voice app as part of a bigger examination of the consumer implications of practices in the wireless industry. It sent questions to Apple, Google and AT&T Inc., the only wireless carrier to offer the iPhone in the U.S.

AT&T and Google also responded with letters to regulators Friday. AT&T said Apple did not consult with the company before turning Google's program down. Google kept confidential the parts of its letter describing Apple's reasons for rejecting Google Voice.

Google Voice gives people an additional phone number that's not tied to any one phone line. People can program the service to direct incoming calls first to a cell phone, then a work number and finally a home number, for example. Users can set up voicemail and have Google Voice e-mail transcripts of their messages. It can also be used to send text messages and place calls — even international ones — at low rates paid to Google, not the carriers. Those calls do burn regular cell phone plan minutes, but the idea has still prompted widespread speculation that Apple and AT&T saw a Google Voice app for the iPhone as a potential competitor to their monthly mobile plans.

Apple said it rejected the program because it replaces the iPhone's own interface for making calls and sending text messages with a Google version. The company said it blocked three other developers' phone programs for the same reasons.

Apple said it also was concerned that the app would send the contents of people's iPhone contact lists to Google's servers.

“We have yet to obtain any assurances from Google that this data will only be used in appropriate ways,” Apple said. “These factors present several new issues and questions to us that we are still pondering at this time.”

The Google Voice snafu comes as competition between onetime allies Apple and Google is heating up. Google has its own cell phone operating software, called Android, and it recently announced plans for a computer operating system that could challenge Apple and its Macs. Eric Schmidt, Google's CEO, resigned from Apple's board in early August, after regulators from the Federal Trade Commission began questioning whether his dual role would make it easier for the two to collude in ways that would diminish competition.

In its response, AT&T told federal regulators Friday that it's not privy to Apple's iPhone application vetting process and played no part in blocking Google Voice. AT&T said the two companies have discussed a handful of programs but not Google's.

Apple's iPhone apps store on iTunes set off a wave of similar digital shops from competitors including Microsoft Corp. and BlackBerry maker Research in Motion Ltd. Outside software developers sign up to get the programming tools necessary for building the apps, then submit them for review and sale on a central site.

Apple has been quiet about the details of its vetting system, which has been criticized as a black box by developers whose apps have been rejected. Some say they submitted apps and waited months, only to be rejected without much of a reason why.

The backlash has grown as some programs have slipped onto the app store that have raised eyebrows — including one game that mimicked a wailing baby and required users to shake the iPhone to extinguish the cries.

In its letter to the FCC, Apple disclosed some aspects of the review process. The company said it gets about 8,500 app submissions a week, some brand new and some updates to existing programs. Apple said more than 40 people work full-time to review the apps, and that at least two look at each one.

(From Associated Press).
Posted by PublicInformationProjects at 09:00 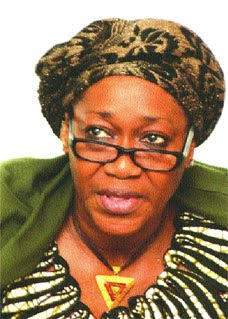 The Coalition Against Corrupt Leaders (CACOL) has urged the Economic and Financial Crimes Commission (EFCC) and other anti-graft agencies to parade all persons and institutions that are responsible for the travails of the five banks whose Chief Executives and Executive Directors where sacked the previous week by the Central Bank of Nigeria (CBN) to serve as deterrent to others.

The anti-graft Coalition of Civil Society Organisations noted that naming of those behind non-performing loans that caused the collapse of the frontline financial institutions is not enough but shaming and nailing them according to the law and the practice of the law enforcement agencies in Nigeria .

CACOL noted in a statement at the weekend that “the indicted persons and institutions that have for so many years deceitfully denied ordinary Nigerian citizens access to capital and honest loans to do their honest businesses that would have earned them decent living conditions should not be treated with better respect than are accorded common criminals that are daily paraded in chains by the EFCC, the police and other law enforcement agencies”. The group noted that it is this untowardly acts of the presumed movers and shakers of the society has turned otherwise honest Nigerian youths into criminals of all descriptions who make security of lives and properties of the innocent a mirage in their homes and on highways while their real tormentors fly around in private jets and move with myriads of security aids and bodyguards.

Noted CACOL “It is necessary for victims of these financial vampires to see faces of their adversaries in the media in handcuffs while sitting on bare floor so that when they appear in various communities, Churches and Mosques to donate billions of naira their victims and potential victims will despise, mock and pelt them with rotten tomatoes, sachet of water rather than welcome them with the usual pomp and pageantry”.

According to CACOL, “among those we would like to see clutching each others’ pants or sitting on bare floor, half naked, handcuffed and leg-chained if found culpable in the scandal are: Mrs Cecilia Ibru of Oceanic Bank for mismanaging N278.2bn, Mr Erastus Akingbola of Intercontinental Bank for N210.9bn, Mr Sebstian Adigwe of Afribank for N141.9bn, Mr Bartholomew Ebong of Union Bank for N73.6bn, Mr Okey Nwosu of FinBank for N42.4bn and Mr Peter Ololo of Falcon Securities Limited for his involvement in N88.3bn non-performing loans”.

According to the statement, “It would be interesting to see on the podium of shame alleged managers of fraud like the Director-General of the Nigerian Stock Exchange, Prof Ndi Okereke Onyiuke who doubles as the Chairman of TRANSCORP for N41.1bn, Alhaji Abdurahman Bashir of Rhamahiya Oil and Gas for N41.4bn, Mr Femi Otedola of Zenon Oil for N19.05bn and African Petroleum, Alhaji Aliko Dangote of Dansa Oil and Gas for N11.3bn, Alhaji Arisekola Alao of Lister Oil for N5bn, Chief Obateru Akinruntan of Obat Petroleum for N5.5bn, Senator Ifeanyi Ararume of FinBank for N158m and Chief Lulu Briggs for N9.8bn.

“Yet others are Mr Henry Imasekha for N49bn, Mr J.I. Arumemi Johnson for N36.9bn, Najite Okoloko for N23.8bn, Mr Aigboje Aig-Imoukhuede for N16.2bn, Mr Jimoh Ibrahim of Global Fleet for N14.8bn, Mr Oba Otudeko of Honeywell for N1.6bn, Nanashetu Abdullahi for N12.8bn, Bashir Admu of Imad Oil and Gas for N10.103bn, Nitel chief Executive for N7.8bn, Chief Executive (Governor) of Delta State for N6.45bn, Senator Annie Okonkwo of Reliance for N800m and former Governor of Rivers State and Dr Peter Odili for N189m”. The aforelisted, according to CACOL “have committed offences that transcends economic and financial crimes but also crimes against humanity since their deeds or misdeeds would have sent many, including babies, pregnant women and other hapless citizens who could have contributed the mismanaged funds through their savings in banks, taxes etc to their untimely graves”.

Observed CACOL, “It is unfortunate that some managers of fraud who sometimes parade themselves as part-time clergymen (and women) junket about town in private jets (to show off what absolute opulence they live in) are allowed by anti-graft agencies, who are empowered to question sources of their astounding wealth, to dazzle ordinary citizens, who may be members of their congregation or constituencies but cannot afford to ride bicycles into further psychological agony with their display of unearned inordinate prosperity”.

“The present democratic experiment”, CACOL observed, ‘has only brought more agony to Nigerians than relief.” According to the Coalition, “the former and the present civilian administrations during the present republic have only worsen the condition of living of the average Nigerian in all areas that can be thought of - power, energy, education, health, economy, security or transportation etc”. Quoting the Secretary of State of the United States of America, Mrs Hillary Clinton who said during her visit to Nigeria two weeks earlier that, “Today I am in Nigeria, a Country that produces 2 million barrels of oil a day, has the seventh-largest gas reserves of any country in the world but according to the United Nations, the poverty rate in Nigeria has gone up from 46 percent to 76 percent over the last 13 years”, the group noted that ten of those thirteen years were spent under the aforementioned regimes of both Chief Olusegun Obasanjo and Alhaji Umaru Yar’Adua.

CACOL finally urged the EFCC not to allow anyone of the culprits in this BankersGate go unpunished. The Coalition seized the opportunity to remind the EFCC that CACOL had once commended the agency for securing about 70 convictions, and recovered about N50 billion within the first year of Madam Farida Waziri in office to show the Coalition’s solidarity with the agency in contrast to the scathing criticism it receives from several quarters. It however warned that the Coalition will call its members out on the streets in procession to shame the EFCC should it fail to adequately shame the bad bank managers, bad bank debtors and their accomplices who have caused ordinary Nigerians so much misery by ensuring that they face the fullest wrath of the law.