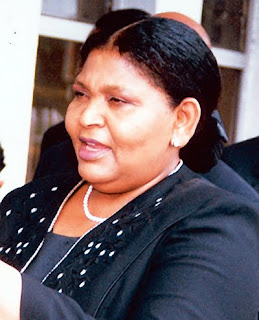 The former Chief Executive Officer(CEO) of Oceanic International Bank Plc, Mrs. Cecilia Ibru, who was recently declared wanted by the Economic And Financial Crimes Commission(EFCC) when she failed to honour the commission's invitation to answer questions on her alleged role in some malpractices in the Bank during her tenure, have successfully negotiated a soft landing on the matter with the Presidency and the ruling party national leadership, chidi opara reports have been reliably informed.

The negotiations which has been going on during the period Mrs. Ibru was in hiding started with high powered lobby on the President and the leadership of Nigeria's ruling party, the Peoples' Democratic Party(PDP). We are however not yet privy to details of the "Ibru deal", what we know is that the President according to a well placed Presidency official who is privy to some details of the lobby, have already called the chairperson of EFCC, Mrs. Farida Waziri and advised her to "handle the Ibru matter with wisdom".

Our investigation revealed that when the lobby on the President hit an initial brick wall, a Delta State born publisher of a very successful national newspaper, who is known to be very close to the President was approached to help. "The young man made the President to understand the role the Ibru family have been playing and will continue to play in the success of our party", a well positioned contact in the PDP national secretariate told one chidi opara reports network member. The lobby on the PDP national leadership according to another PDP insider, "was smooth". We can also confirm the the Director-general of the Nigeria Stock Exchange, Dr. Ndidi Okereke-Onyiuke spoke to the President's wife, Mrs. Turai Yar'Adua on soft landing for Mrs. Ibru.

"We are not happy with the way Sanusi and Waziri are embarassing our very important members, they should be told that without these people, there would not have been any Yar'Adua government to work for", a PDP national officer from the South-east complained in a private conversation with our Publisher/Editor-In-Chief, Mr. Chidi Anthony Opara and others at an occasion in Imo state on sunday.

There is indication that Mrs. Ibru surrendered to EFCC yesterday after her family got assurances from the Presidency and the PDP national leadership that the case would be handled in a manner that would not embarass her very rich and influential family.
Posted by PublicInformationProjects at 02:23