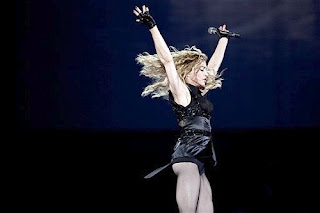 At first, fans politely applauded the Roma performers sharing a stage with Madonna. Then the pop star condemned widespread discrimination against Roma, or Gypsies — and the cheers gave way to jeers.

The sharp mood change that swept the crowd of 60,000, who had packed a park for Wednesday night's concert, underscores how prejudice against Gypsies remains deeply entrenched across Eastern Europe.
Despite long-standing efforts to stamp out rampant bias, human rights advocates say Roma probably suffer more humiliation and endure more discrimination than any other people group on the continent.
Sometimes, it can be deadly: In neighboring Hungary, six Roma have been killed and several wounded in a recent series of apparently racially motivated attacks targeting small countryside villages predominantly settled by Gypsies.
"There is generally widespread resentment against Gypsies in Eastern Europe. They have historically been the underdog," Radu Motoc, an official with the Soros Foundation Romania, said Thursday.

Roma, or Gypsies, are a nomadic ethnic group believed to have their roots in the Indian subcontinent. They live mostly in southern and eastern Europe, but hundreds of thousands have migrated west over the past few decades in search of jobs and better living conditions.
Romania has the largest number of Roma in the region. Some say the population could be as high as 2 million, although official data put it at 500,000.

Until the 19th century, Romanian Gypsies were slaves, and they've gotten a mixed response ever since: While discrimination is widespread, many East Europeans are enthusiastic about Gypsy music and dance, which they embrace as part of the region's cultural heritage.
That explains why the Roma musicians and a dancer who had briefly joined Madonna onstage got enthusiastic applause. And it also may explain why some in the crowd turned on Madonna when she paused during the two-hour show — a stop on her worldwide "Sticky and Sweet" tour — to touch on their plight.
"It has been brought to my attention ... that there is a lot of discrimination against Romanies and Gypsies in general in Eastern Europe," she said. "It made me feel very sad."
Thousands booed and jeered her.
A few cheered when she added: "We don't believe in discrimination ... we believe in freedom and equal rights for everyone." But she got more boos when she mentioned discrimination against homosexuals and others.
"I jeered her because it seemed false what she was telling us. What business does she have telling us these things?" said Ionut Dinu, 23.

Madonna did not react and carried on with her concert, held near the hulking palace of the late communist dictator Nicolae Ceausescu.
Her publicist, Liz Rosenberg, said Madonna and other had told her there were cheers as well as jeers.
"Madonna has been touring with a phenomenal troupe of Roma musicians who made her aware of the discrimination toward them in several countries so she felt compelled to make a brief statement," Rosenberg said in an e-mail. "She will not be issuing a further statement."
One Roma musician said the attitude toward Gypsies is contradictory.
"Romanians watch Gypsy soap operas, they like Gypsy music and go to Gypsy concerts," said Damian Draghici, a Grammy Award-winner who has performed with James Brown and Joe Cocker.
"But there has been a wave of aggression against Roma people in Italy, Hungary and Romania, which shows me something is not OK," he told the AP in an interview. "The politicians have to do something about it. People have to be educated not to be prejudiced. All people are equal, and that is the message politicians must give."

Nearly one in two of Europe's estimated 12 million Roma claimed to have suffered an act of discrimination over the past 12 months, according to a recent report by the Vienna-based EU Fundamental Rights Agency. The group says Roma face "overt discrimination" in housing, health care and education.
Many do not have official identification, which means they cannot get social benefits, are undereducated and struggle to find decent jobs.
Roma children are more likely to drop out of school than their peers from other ethnic groups. Many Romanians label Gypsies as thieves, and many are outraged by those who beg or commit petty crimes in Western Europe, believing they spoil Romania's image abroad.

In May 2007, Romanian President Traian Basescu was heard to call a Romanian journalist a "stinky Gypsy" during a conversation with his wife. Romania's anti-discrimination board criticized Basescu, who later apologized.
Human rights activists say the attacks in Hungary, which began in July 2008, may be tied to that country's economic crisis and the rising popularity of far-right vigilantes angered by a rash of petty thefts and other so-called "Gypsy crime." Last week, police arrested four suspects in a nightclub in the eastern city of Debrecen.
Bulgaria, the Czech Republic and Slovakia also have been criticized for widespread bias against Roma.

Madonna's outrage touched a nerve in Romania, but it seems doubtful it will change anything, said the Soros Foundation's Motoc.
"Madonna is a pop star. She is not an expert on interethnic relations," he said.

(From Associated Press)
Posted by PublicInformationProjects at 01:20