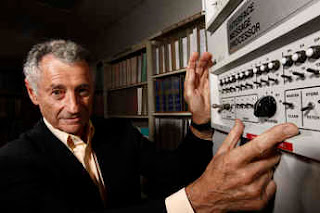 Goofy videos weren't on the minds of Len Kleinrock and his team at UCLA when they began tests 40 years ago on what would become the Internet. Neither was social networking, for that matter, nor were most of the other easy-to-use applications that have drawn more than a billion people online.
Instead, the researchers sought to create an open network for freely exchanging information, an openness that ultimately spurred the innovation that would later spawn the likes of YouTube, Facebook, and the World Wide Web.
Today, while the Internet is more widely available and faster than ever, artificial barriers threaten to constrict its growth.

A variety of factors are to blame. Spam and hacking attacks force network operators to erect security fire walls. Authoritarian regimes block access to many sites and services within their borders. And commercial considerations spur policies that can thwart rivals, particularly on mobile devices such as the iPhone.
"There is more freedom for the typical Internet user to play, to communicate, to shop - more opportunities than ever before," said Jonathan Zittrain, a law professor and cofounder of Harvard's Berkman Center for Internet & Society. "On the worrisome side, there are some longer-term trends that are making it much more possible [for information] to be controlled."

The Internet did not become a household word until the '90s, though, after a British physicist, Tim Berners-Lee, invented the Web, a subset of the Internet that makes it easier to link resources across disparate locations. Meanwhile, service providers such as America Online connected millions of people for the first time.
That early obscurity helped the Internet blossom, free from regulatory and commercial constraints that might discourage or prohibit experimentation.
"Allow that open access, and a thousand flowers bloom," said Kleinrock, a UCLA professor since 1963.
That idealism is eroding.

An ongoing dispute between Google Inc. and Apple Inc. underscores one constraint.
Like some other mobile devices that connect to the Internet, the iPhone restricts the software that can run on it. Only applications Apple has vetted are allowed.
Apple recently blocked the Google Voice communications application, saying it overrides the iPhone's built-in interface. Skeptics, however, suggest the move thwarts Google's potentially competing phone services.

On desktop computers, some providers of Internet access have erected barriers to curb bandwidth-gobbling file-sharing services used by their subscribers. Philadelphia's Comcast Corp. got rebuked by the Federal Communications Commission last year for blocking or delaying some forms of file-sharing; Comcast ultimately agreed to stop that.

Even if service providers do not actively interfere with traffic, they can discourage consumers' unfettered use of the Internet with caps on monthly data usage. Some access providers are testing drastically lower limits that could mean extra charges for watching just a few DVD-quality movies online.

While Apple insists its reviews are necessary to protect children and consumer privacy and to avoid degrading phone performance, other phone developers are trying to preserve the type of openness found on desktop computers. Google's Android system, for instance, allows anyone to write and distribute software without permission.
Yet even on the desktop, other barriers get in the way.

Steve Crocker, an Internet pioneer who now heads the start-up Shinkuro Inc., said his company had had a tough time building technology that helps people in different companies collaborate because of security fire walls that are ubiquitous on the Internet.
No one's suggesting the removal of all barriers, of course.
What the Internet's leading engineers are trying to avoid are barriers that are so burdensome that they squash emerging ideas before they can take hold.

Already, there is evidence of controls at workplaces and service providers slowing the uptake of file-sharing and collaboration tools. Video could be next if consumers shun higher-quality and longer clips for fear of incurring extra bandwidth fees.
If such barriers keep innovations from consumers, we may never know what we're missing.

(From Associated Press)
Posted by PublicInformationProjects at 12:55 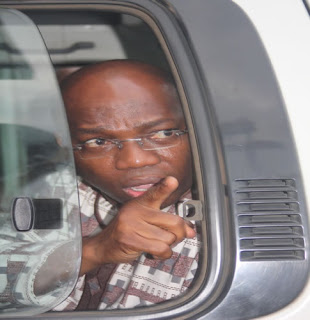 Mr. Okey Nwosu former CEO of Finbank Plc  being driven into the premises of the Federal High Court Lagos yesterday. 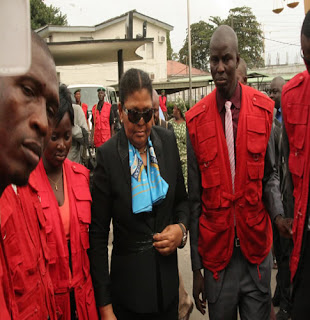