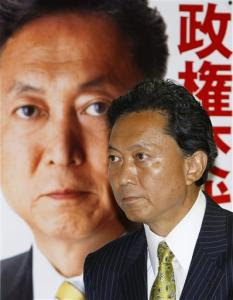 Hatoyama's Democratic Party of Japan, meanwhile, neared an agreement with two smaller parties Thursday on launching a coalition to push aside the outgoing Liberal Democratic Party, rein in the national bureaucracy, and set a new course for the world's second-largest economy.

The party won 308 of the 480 seats in the powerful lower house of parliament in Sunday's elections. The landslide victory ended decades of rule by the Liberal Democrats.

Hatoyama, to be installed as premier on Sept. 16, spoke with President Barack Obama by telephone early Thursday and then paid a visit to Washington's new ambassador to Japan for his first discussions with any diplomats here.Hatoyama assured Obama the U.S.-Japan security alliance remains the "foundation" of Japan's foreign policy."The talks were cordial," Hatoyama told reporters Thursday. "I think we will have good relations."

During the election campaign, Hatoyama said he would end Japan's refueling operations in the Indian Ocean in support of U.S. troops in Afghanistan, and questioned plans to relocate a U.S. Marine air station on the southern island of Okinawa.He later toned down his rhetoric, insisting the U.S.-Japan alliance is vital to Tokyo's foreign relations -- a point he stressed in his phone call with Obama and his meeting with Ambassador John Roos.

Under pressure from coalition partners such as the Social Democratic Party, which is expected to be a part of Hatoyama's yet-to-be-named Cabinet, he has said he will let the refueling mission end when its mandate finishes in January.The Obama government has worked to boost relations with Japan after they cooled somewhat under the previous administration. U.S. officials have been quick to embrace the incoming government.

Roos, who met Hatoyama Thursday afternoon for about 40 minutes, called the meeting "very warm" and said they discussed the "very deep relationship" between the countries.
"We spent a lot of time talking about how to enhance and further deepen that relationship across a broad range of issues," Roos said in a statement. Hatoyama also met with members of the smaller parties Thursday and officials said they were near a consensus on policy issues.

Japanese media said Thursday the Democrats have agreed with the two smaller parties on issues ranging from swine flu measures to child care and holding back on raising the national sales tax.
"We are continuing our talks. We hope to reach an agreement by later this week in a bid to launch a coalition government," said Yuji Katagiri, a spokesman at the People's New Party, a small opposition party, which joined coalition talks with Hatoyama's party and another smaller party, the Social Democratic Party.
An official at the Democratic Party declined to give details.

On domestic issues, the Democrats will have to deal with Japan's highest unemployment rate since World War II -- at 5.7 percent -- and have vowed to shift the focus of economic policies from the Liberal Democrats' big business orientation to one that centers more on consumers and families.
They have also promised to limit the influence of the country's vast and deeply entrenched national bureaucracy, which often writes and formulates the policies of the country and enjoys a strong influence over setting the national agenda.

"While Hatoyama repeatedly said he would end bureaucrat-led politics, this is not an easy thing to do," said Yoshinobu Yamamoto, political science professor at Aoyama Gakuin University. "To implement government policies, Hatoyama will need their vast expertise and experience. Without their policy expertise and cooperation, he won't be able to carry out any government measures.

(From Associated Press)
Posted by PublicInformationProjects at 11:31