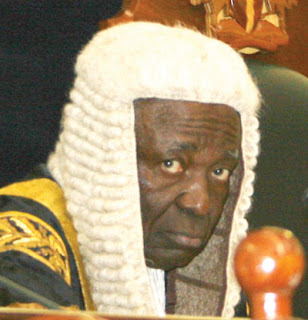 The Coalition Against Corrupt Leaders (CACOL) is made up of over 35 Non-Governmental, Civil Society and Community-Based organizations that have the objective of fighting against corruption in their organizational agenda. CACOL will be two years old this September. However, we have written a couple of petitions to the major anti-corruption agencies in Nigeria , particularly the EFCC and ICPC. This is with a view to encouraging the agencies to investigate sources of suspicious material wealth of some past and current Nigerian leaders in various government organs, Ministries, Departments and Agencies.

Some of our petitions are receiving necessary attention from some of the anti-graft agencies, but some of them are not being satisfactorily treated. For the latter category especially, we have to carry out follow-up activities to remind the agencies of the outstanding attention the petitions required. If they remain adamant, we deploy all possible but civilized protest strategies like mass letter-writing, processions, media advocacy, leafleteering etc to direct the attention of the public and all organs of government to our complaints. Some of these pressure strategies have engendered positive actions from concerned duty-bearers and some of the suspected corrupt leaders are either being investigated or prosecuted while a few have been convicted already, even when in our opinion the penalties are disproportionately lighter to the gravity of the crimes committed.

One of the cases of alleged corrupt past Nigerian leaders that caught our attention is that of the former Governor of Delta State, Chief James Onanefe Ibori. The case is currently pending in your court in Asaba. Chief Ibori's case is particularly outstanding among the lots of its kind as the gentleman's journey into, through and out of political power in Delta State has being one fraught with evil controversies bothering on alleged crimes of dishonesty, treachery, abuse of power, graft, corruption, money laundering!

According to information available to us, the former governor of the oil rich state in the crisis ridden Niger Delta region of Nigeria is one of the most powerful, most influential, most controversial as much as craftiest men in Nigeria today. Although President Umaru Yar'Adua has denied it, James Ibori is alleged to be the biggest financial sponsor of the 2007 Presidential campaign machinery of the Peoples Democratic Party (PDP) candidate. The election in itself was characterized by several electoral fraudulent practices like multiple voting, stuffing of ballot boxes, hijack of election materials, manipulation of electoral results, and violence of all descriptions. Others included intimidating of the Independent National Electoral Commission (INEC) to get PDP's reluctant candidate declared the winner. Subsequently, also through what has been widely described as the manipulated judicial process got him confirmed as the Nigeria 's 4th 'elected' President. Good enough, the president so declared has, in his innocence, declared that the election that brought him to power is unwholesome.

But for the allegation of massive looting of the treasury of Delta State hanging on his neck and the long arm of the law that has caught up with some members of his family and associates at home, in the United States of America and Britain, Ibori would have become one of the most powerful ministers in the Yar'Adua's cabinet as pay back for his generosity towards the PDP's hijack of the central government in Nigeria today. James Ibori is however a fugitive of a sort. He is running away from facing the course of justice in Britain , the USA and before the High Court in Asaba.

According to media reports, the affidavit deposed by the head of the EFCC team that investigated his case, Yahaya Bello made findings against Ibori that include several questionable payments to companies, his associates and aides. The findings alleged that the former governor bought several companies, apart from the Bombadier and Challenger jets he bought for several millions of dollars for his private use. He was also alleged to have borrowed, through a front of his, a total of about 198 million dollars from Oceanic Bank that is now distressed because of huge non-performing loans like the one being held by Ibori's concerns.

Apart from the frustrating delay tactics being employed by Ibori trough filling of frivolous motions, we believe this alleged economic and financial criminal has an ally in the Minister of Justice and Attorneys-General of the Federation Chief Michael Aondoakaa. The latter who was alleged to have been sponsored by Ibori is also a pathological hater of EFCC. He had once represented the former Governor of Benue State, George Akume in a case seeking an order from the Supreme Court to scrap the agency by declaring it an illegal body lacking in rights to investigate or prosecute corruption cases. When he became the Minister, Chief Aondoakaa tried to incapacitate the EFCC and its sister agencies like ICPC and Code of Conduct Bureau, CCB by usurping their prosecutorial powers.

This same Minister of Justice and AGF whose priority should be defence of ordinary Nigerians by promptly bringing corrupt leaders to book has severally demonstrated that he has no interest in such engagement. When such cases involve former governors, particularly his benefactor James Ibori, Aondoakaa is fond of protecting Ibori with all his powers and opportunities both at home and abroad.

Your honourable self would remember that the AGF tried to extricate Ibori from the restraint proceedings in a London court. According to media reports, the Southwark Crown Court in London had on August 2, 2007 frozen Ibori's assets around the world estimated at about $35 million. But the freeze order was lifted on October 2, 2007 after Speechly Birchain, Ibori's Lawyer, presented to the court a letter written by Aondoakaa stating that the former governor was under no investigation in Nigeria in response to an inquiry from Birchain without reference to EFCC, ICPC, CCB or any other investigating agency in the country. Significantly, AGF Aondoakaa said in his letter that he had not requested the Metropolitan Police in London for any assistance in investigating Ibori as required under the Mutual Legal Assistance Treaty between Nigeria and Britain . This let Ibori off the hook. Nonetheless, Ibori's victory in Britain was short-lived as another court has reinstated the freeze order on his assets. Besides, Chief James Ibori, according to a Counsel to the EFCC, Mr. Rotimi Jacobs, is an ex-convict of Clerkkenwell Magistrates Court, London . He was fined 300 pounds and ordered to pay 450 pounds as costs.

Sir, we have gone to this extent to state a little about what we read about the accused before you so as to let you know how crafty he could be. We write this letter out of frustrations we have been subjected to by several judgments we have seen delivered on corruption cases that make our efforts in the fight to bring corrupt leaders to book an unnecessary venture. Most of them impose just a slap on the wrist penalty on culprits and thus keep corrupt practices an attractive pastime of our political leaders. Instead of the judgments serving as deterrents they seem to encourage fraudsters in power to be more brazen in the act. This is causing our dear country serious embarrassment among the comity of nations. Most corrupt leaders have enormous wealth they could use to hire the best technocrats in the art of time wasting rigmarole aimed at frustrating the interest of courts in the case. This provided for the culprits the opportunities needed to obliterate evidences against them and intimidate their prosecutors' witnesses to submission. But do we have moral justification for preventing them from proving their innocence or protect them from necessary court conviction if otherwise?

We are one of the ardent critics of the present EFCC for lethargic negligence in the prosecution of the Ibori case. We had accused them of shirking their responsibilities in growing the Nigerian economy because we are aware of so much power it has under the law to book the corrupt. They sometimes allow preventable cases become an emergency before they employ 'fire-brigade' approach to tackle them. We are also aware of efforts they have made to bring corrupt elements to book, even when such could have been done better. We are however not unaware of their frustrations from different quarters especially the culprit with enormous capacity to buy over prosecutors evidences and witnesses. We can imagine how the Attorney-General, given his soft spot for protecting some EFCC accused, could have withheld necessary support the anti-graft agencies require to aid their diligent prosecution of such owing to his antecedents at home and abroad.

We are also aware of scathing criticisms the EFCC especially have been bombarded with both by Nigerians and foreigners, the worst of which came from the United States' Secretary of State, Hillary Clinton, when she came calling a few weeks back. We are also aware that both Nigerians and their friends are not impressed by President Yar'Adua's disclaimer that he did not ask anyone to steal his people's money to sponsor his campaign. Neither does anyone give him any chance on the anti-corruption item on his Seven-Point Agenda based on the disinterested attitude of his lieutenants about it. Equally is the derision with which the re-branding effort of the Minister of Information, Dora Akuyili is viewed owing to inadequate and insufficient prosecution and conviction of high-class corruption culprits.

We are not saying Chief Ibori is yet guilty as charged, but the argument being canvassed by his lawyers seem to us too frivolous, pedestrian, infantile and useless to warrant your investing your precious time on entertaining them. If some litigants and some members of the bench are aiming at dragging the judiciary in the mud your courts should please use its powers to disallow it. It would not have mattered if the case was heard in your brother court in Kaduna . It was for the same reason for time wasting that it is being heard by yours in Asaba now. Who knows, they may want the game plan to go on for ever. Such will only make treasury looters have unfortunate precedence to refer to. Please don't allow your court to be made that theatre of historical anomie.

We are aware that the judges in the courts under your jurisdiction are renowned for courageous decisions despite the temptation of compromise or precarious hazards of danger that accompany them. We salute such courage and plea for their re-enactment in this case. We want their names written in gold and let generations yet unborn admire their foot prints in the sands of time long after they might have retired with deserved dignity and untainted integrity.

If EFCC and other law enforcement agencies are forced by spirit of patriotism, protests and public criticism to take cases to courts, we feel that the courts will remain the last hope of the common man by playing their honest roles in ensuring that criminals don't go unpunished. We wouldn't want the courts of the land under your jurisdiction to be held up as the excuse for dereliction by EFCC or any anti-corruption agency's claim that the "accused persons ambushed them at the courts". The Ibori case in particular, in view of the controversy that surrounds it, deserves not just judgments but the utmost justice: justice that should not only be done but seen by all and sundry to have been done.

Thank you in anticipation

Photo News: Protests Over Demolition Of Waterfronts In Port Harcourt 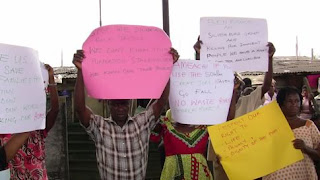 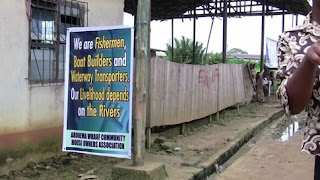 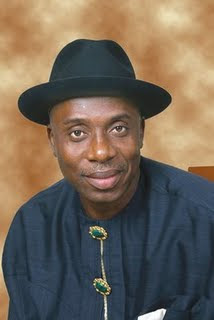 (From A Citizen Reporter)
Posted by PublicInformationProjects at 02:36