A woman journalist was convicted Monday of public indecency for wearing trousers, but was spared a sentence of flogging. A defiant Lubna Hussein said she would not pay a $200 fine and would take a month in prison instead to protest Sudan's draconian morality laws.


The 43-year old journalist has set out to challenge the police and courts since her arrest in July by insisting the case go to trial, aiming to embarrass the Khartoum government with the publicity. Her prosecution — and the prospect that she could get the full sentence of 40 lashes — drew an international outcry.

The judge's decision to impose a fine equivalent to $200 appeared to be an attempt to curb the criticism.
"I will not pay a penny," Hussein, who during the court session wore the same trousers that sparked her arrest, told The Associated Press after the ruling.

During the session, police rounded up about 40 women protesting outside the courthouse in support of Hussein, some of them wearing trousers as well in a sign of solidarity.

Sudan's government implements a conservative version of Islamic law in the north. Under public indecency laws, anyone committing an act or wearing clothing deemed indecent can be punished with a flogging or a fine, but lawyers and human rights groups say the law is too vague and arbitrary. In the capital the "public order" police enforce the laws, breaking up parties and scolding men and women who mingle in public.

In mostly Muslim northern Sudan, many women wear traditional flowing robes that also cover their hair, but it is also not uncommon for women to wear trousers, even though conservatives consider it immodest.

Public order police arrested Hussein along with around a dozen other women in a Khartoum public cafe. Ten of the women received a quick, closed-door trial and were flogged soon afterward, avoiding the social stigma associated with a public trial on morality charges.

Hussein, however, insisted on a public court and even resigned from her job in the U.N.'s public information office because it gave her immunity.

After a three-hour session Monday, the judge ruled Hussein's outfit indecent and imposed the fine. He said her clothes violated traditions that a woman should only "adorn themselves" for their husbands and not in public, Hussein's lawyer said.

Lawyers said Hussein would be taken to a jail in Omdurman, on the outskirts of Khartoum, after she refused the fine. Galal al-Sayed, Hussein's lawyer, called the ruling "incorrect" because the judge ignored his request to present defense witnesses and based his decision on contradictory statements from the prosecution witnesses. Al-Sayed said he would appeal the conviction. He said the judge had apparently opted for a fine, not flogging, to avoid international criticism. "There is a general sentiment in the world that flogging is humiliating."

Even before the ruling, Hussein said she would refuse any fine. "I won't pay, as a matter of principle," she said. "I would spend a month in jail. It is a chance to explore the conditions in jail."

It is not the first time Sudanese courts have raised an outcry. In 2007, a British teacher was charged with insulting Islam after she allowed her students to name a teddy bear Muhammad in a class project, which some radical clerics called an insult to Islam's prophet. She was convicted and sentenced to 15 days in prison, though not the possible sentence of 40 lashes — again, an apparent move to avoid worsening international criticism. She then received a presidential pardon and returned to Britain.

Hussein's case has raised a string of condemnations by international human rights groups, and Hussein has sought to draw attention to Sudan's morality laws.

Amnesty International called on the Sudanese government to withdraw the charges against Hussein and repeal the law which justifies such "abhorrent" penalties. The London-based group said Friday that the law allowing flogging is state-sanctioned torture.

It pointed to an incident in 2003 when eight women were flogged in public with plastic and wire whips, reportedly leaving permanent scars on the women. The women had been picnicking with male friends.

Human rights and political groups in Sudan say the law is in violation of the 2005 constitution drafted after a peace deal ended two decades of war between the predominantly Muslim north and the Christian and animist south Sudan.

In a column Friday in the British daily Guardian, Hussein said her case is not an isolated one but is emblematic of repressive laws in a country with a long history of civil conflicts. "When I think of my trial, I pray that my daughters will never live in fear of these police," she wrote.

Hussein said she would take the issue all the way to Sudan's Constitutional Court, but that if the court rules against her and orders the flogging, she's ready "to receive (even) 40,000 lashes" if that what it takes to abolish the law. "We will only be secure once the police protect us and these laws are repealed," she wrote.

Government spokesman Rabie Abdel Attie said Monday that "this is not a way to change the law."
"Changing the laws goes through officials, and it is a continuous matter looked into by the parliament," he said. Abdel Attie said many women in Sudan wear trousers in government offices and institutions. He said there may be other issues surrounding Hussein's case that led to her arrest, but he refused to elaborate on what they might be. "These courts are not convened without a crime. Lubna was convicted and she should respect the law," he said.

(From Associated Press)
Posted by PublicInformationProjects at 12:14

Turai Yar'Adua: Images Of President's Wife Who May Be President 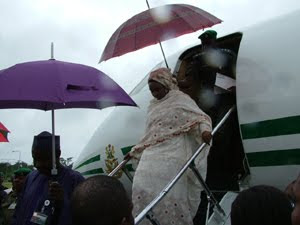 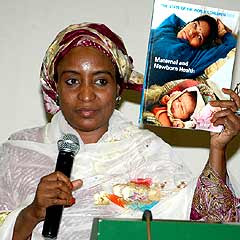 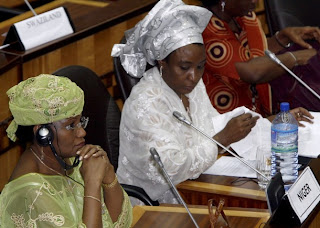 The recent statement credited to Mr. Godwin Daboh, a chieftain of the Nigerian ruling party, in which he posited that the ruling Peoples Democratic Party(PDP) should nominate Mrs. Yar'Adua to vie for the office of President in 2011, in the event of her husband not being able to vie for health reasons is seen by observers as commencement of the Turai Yar'Adua for President project.