Gani Died For Us All(Article) 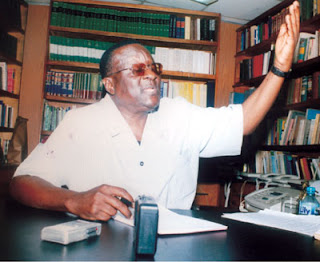 On Friday, May 29, 1992 when armed security men stormed Chief Gani Fawehinmi’s Anthony Village law Chambers and demanded to take him away, Chief said he was not surprised as he had a premonition that agents of the military government of General Ibrahim Babangida would soon come for him. He insisted on leaving a message for his “friends and colleagues”. The terse message he was allowed to write thirty minutes before he was taken away read:

Before I was arrested and detained by Babangida’s government:
I am taken away today, Friday, May 29, 1992 by the Government of General Babangida.
Even if they kill me, my spirit will continue to fight for the oppressed people of this country - Nigeria,
No leader has a right to turn his people into paupers. Surely, there is an alternative to poverty and above all, there is an alternative to oppression which Babangida has subjected this country to. I crusade for that alternative. If I have to die, it is a noble death. I have no regrets”.

Indeed Gani lived and die for his crusade for the alternative to oppression which successive military and their civilian variants have subjected Nigeria to. He came, saw, did his bit, conquered to the extent that his professional and socio-economic resources could allow him and died a noble death. The struggle is not meant to be won by any particular generation of fighters. Those who pass through the turf are only to leave their footprints on the sands of the time by leaving their society better than they met it. Gani has done this. He made himself a pinhead that pricks the conscience of evil men of power when they engage in their evil plans. He opened our eyes to places our sufferings are manufactured and what we need to shut such evil factories down. He gave us tools of fight in the mould of passive resistance through mass action and judicial process. He demystified detentions, detention centres and the hitherto dreaded prison yards by preparing to go even before his jailers came calling. He fought gallantly and died honourably.

Of course Gani did not die in vain. He died for us all. But he left a legacy of courage, resilience, uprightness, principle and integrity. These are the tools of credible struggle Gani left behind with which the struggle can progress and be consolidated. At least he was able to prove doubting Thomases wrong that nobody is clean. Gani was clean. He was virtuous from cradle to grave.

Some of us saw these ideals earlier than a few of our colleagues in the progressive camp. Those who believed in his ability to be steadfast in integrity honoured him twenty years before he took the final exit. When we started the Gani Fawehinmi Solidarity Association (GFSA) in 1989 under the leadership of late Dr Tai Solarin and Dr Osagie Obayuwana, Benard Odulana also of blessed memory and chose to fight corruption that was being institutionalized then by the regime of General Ibrahim Babangida, many castigated us for naming our Association after a living being. Our critics argued that Gani could soon begin to hobnob with the government and shame us. We were undaunted, we knew our hero. He was a man of superlative integrity. He never shamed us!

Gani was one of the most honest of the few most honest that the world has produced. He was one of the most courageous of the courageous. Most forthright of the forthrights and kindest of the kind. He invested in human development than any other area of his engagement. Apart from creation of jobs for lawyers working in his law firm and publishing company, he advanced knowledge of law and the social system by his publications.

He awarded several scholarships to indigent students in various schools, colleges and universities, he provided livelihood for beggars and several other less-privileged in the society. He was humble, thoughtful, superlatively intelligent, versatile and creative.

He had no faintest traces of a person that could give in to corruption, and he never did. He had opportunity to take juicy appointments, briefs, even contracts from various governments he never did. Some of his contemporaries are now defending the looters and plunderers of our common patrimony. Some of those who claim they learnt at Gani's feet are now ballot box snatchers. Gani never thought anyone to loot treasuries, steal votes or defend stealers of mandates. He never did. Gani proved himself to be truly the conscience of the nation.

As I have written elsewhere, I'm not surprised that Femi (Falana) is highly touched by Gani's demise. I know he knew Gani like the palm of his hands and adored him as his senior colleague, not only in legal practice but also in prison experiences. Gani is our mutual mentor. Gani was my teacher, my moulder, my inspiration. He was what many of his contemporaries was not - one who promised and fulfilled that he would fight bad governance in Nigeria till he breathed his last. He did just that when, three days to his final bow he went on appeal in a case against the state he believed was not fairly adjudicated upon by the lower court. Many of his former contemporaries have abandoned the struggle even before they see one percent of state harassment Gani saw.

But like Yinka Odumakin noted, there is a trend of the sickness and death by those detained by the military junta: Fela died of AIDS-related sickness (his lifestle was the cover) who says HIV was not injected into his system while in prison? Beko died of lung cancer (his smoking habit was the cover) but he could have been given the Ganicidal treatment in prison, Mr Alao Aka-Bashorun, Comrade Ola Oni, Prof Akin Fadahunsi died also of terminal ailments. Chima Ubani died under suspicious circumstances. What excuse does anyone have for this one death too many of Gani who never smoked, drank, moved in polluted environment or lived in air-polluted houses. The only place his lungs could have been cancerously poisoned was the prison.

Especially when Babangida put him is solitary confinement in Gashua prisons. And Gani said so before he left. His life was snuffed out by successive wicked regimes that put him under murderous prison conditions. This cannot but be so since his various imprisonments was organised by hostile administration who never wanted him to live. There is no doubt that the precarious prison life largely contributed to his death. Most of us who have gone to prison are dying gradually. None of us has ever been the same health wise after prison experiences.

I only fear for those who are still living like Femi Falana, Baba Omojola, Frank Kokori, Segun Mayegun, Bamidele Aturu, Gbenga Komolafe, Gbenga Olawepo etc. I know all of us have been killed by this wicked system in Nigeria up to a certain extent, we are only waiting for the time our bodies will become motionless like Gani's. However, those who can afford it should have the condition of their health regularly checked up in credible hospital abroad where the possibility of wrong diagnosis is minimal.

Under the banner of the Gani Fawehimi solidarity Association (GFSA), one had written the following in a publication on October 1, 1989:

Gani Fawehimi And The People; One And The Same:
We the people, the real owner of the wealth of our country must not allow our country to be ravaged any longer. We have had enough misrule. We do not want to suffer any more from property, hunger, ignorance and disease. We must demand what rightly belongs to the people-the whole wealth of Nigeria. We are tired of foreign masters. We are ashamed of Nigeria stooges. We love our country and our people. Many patriotic Nigeria have risked and are risking everything - their property, their lives, their families in order to throw away the yoke of oppression and to make us all free. And so, when such patriots face the wrath, injustice and victimization by our rulers, our freedom as a people is in danger.

This is why GANI FAWEHINMI IS US AND WE are GANI FAWEHINMI. The lawyer and patriot who has spent most of his adult life - through his words, his deed, his life, his legal practice and financial income - everything he has, fought to make Nigeria a just and free society. GANI FAWEHINMI has struggled on the side of the majority and the poor people in Nigeria, together with patriotic individuals such as Tai Solarin, Pa Imoudu, Balarabe Musa and many others and patriotic organizations such as ASUU, NMA, NBA, NLC. Gani has always said that he will prefer to die than be on the side of the rich and corrupt rulers of Nigeria. It is not Gani that is on trial. What are on trial are freedom, justice and right of the Nigeria people for a better future. The trial of Gani is a political harassment meant to silence all patriotic voices in Nigeria.

We the people must fight back. We must not allow apostles of SAP (Structural Adjustment Programme) to turn us the people into zombies. We must not allow them to defeat the ideals for which Gani stands. This patriot they must not humble. We must be on his side till victory”. We can now say that Gani was not disgraced. It is not Gani that died, it is the soul of his killers that died. Their minds will rest no more. Adieu Gani, till we meet to part no more.

To Femi Falana, if you won't pick up the gaunlet of the struggle at this juncture, who will?