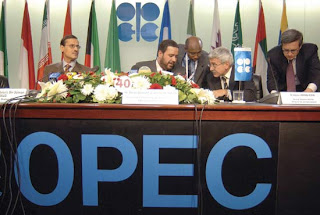 Instead, the focus at the organization's meeting in Vienna was to be on persuading members not to sell more oil than their quotas permit.

Kuwait's oil minister, Sheik Ahmed Al Abullah Al Sabah, said OPEC's markets monitoring committee would suggest to the 12-country group that oil output targets be held steady at the organization's meeting Wednesday in Vienna. The gathering is being held in the evening since it falls during the holy month of Ramadan when Muslims must fast from dawn to dusk.

The recommendation offers further indication that ministers from the bloc - supplier of roughly 35 percent of the world's crude - are turning their aim toward encouraging member discipline. Compliance with the output limits, which are designed to support prices, has been waning.

Prices are now roughly double their levels from December, when the Organization of Petroleum Exporting Countries announced its record 4.2 million barrel per day cuts from September 2008 levels. The price rally has been welcome news for cash-hungry member governments, but also a temptation to sell more oil.

U.S. benchmark light sweet crude for October delivery was hovering at around $71 in electronic trading on the New York Mercantile Exchange. The level is well within the range that OPEC kingpin Saudi Arabia, and others, have said it would like to see.

Saudi Arabian Oil Minister Ali Naimi, whose country is OPEC's top producer and most influential member, told reporters Tuesday that crude's current prices "is good for everybody: consumers and producers."

OPEC leaders are concerned a price spike could hurt the nascent global economic recovery after the world's worst recession in decades destroyed demand for crude, the chief foreign revenue source for the majority of OPEC's members.

Iraqi Oil Minister Hussain al-Shahristani told reporters that while prices were significantly higher than at the start of the year, "we feel that there is still some room for improvement."

"But we are satisfied at the (current) level," said al-Shahristani, adding that "all indications (are) that the market is well supplied, and I don't think there will be need, really, to revise our previous decision."

Others said that while prices were comfortable, there were still significant risks in the market.

Algerian Oil Minister Chakib Khelil said Tuesday that "lots of uncertainties remain," but stressed that careful implementation of the group's last round of output cuts will help stabilize the market within the next six months.

"All we need to do is comply with what we have decided to do," he said.

Adhering to those quotas has typically been one of OPEC's chief weaknesses.

"Compliance could be better," Mohammed bin Dhaen al-Hamli, the United Arab Emirates' oil minister, told reporters Wednesday. But al-Hamli, too, discounted the need for an output cut, saying that "we are comfortable with the market at the moment."

With quota adherence down to around 70 percent, the group can ill afford to look the other way at a time when global crude demand remains weak, oil inventories high, and major non-OPEC producers like Russia showing little indication they are willing to do more than pay lip service to OPEC's calls for broader coordination on production.

Given their current overproduction, OPEC "cannot say we're going to cut because no one will believe them," said John Hall, of London-based John Hall Associates. "Credibility matters."

That puts OPEC in a difficult position. Global crude inventories in the West remain well above the 52 to 54-days of forward cover the group sees as comfortable. Inventories of refined oil products generally in demand in winter months are also high, meaning that OPEC cannot count on refiners to churn out more products and, in the process, run down crude stocks.

"If they leave things as they are, that makes sense, as we're seeing signs of recovery," said Olivier Jakob of the Switzerland-based oil consultancy Petromatrix. But with the recovery "still in the early stages. I don't think they want to rush in changing their output."

Kuwait's Al Sabah said Tuesday while a quick rebound in demand for crude was unlikely, he expected a "noticeable improvement" in the first and second quarters of 2010.

That leaves the group will little room for error if it hopes to see current prices sustained through the year.

(From Associated Press)
Posted by PublicInformationProjects at 12:50