The deal was cheered by German Chancellor Angela Merkel, who saw it as a jobs saver ahead of Sept. 27 national elections.

The Opel Trust has given its approval for the sale. Fred Irwin, who chairs the government-backed trust set up to oversee Opel before GM's bankruptcy, had final say on the deal because it holds 65 percent the company whose brands include Britain's Vauxhall; GM held the other 35 percent.

GM said key issues — including support from labor unions and a financing package from the German government — would have to be finalized, but it expected the deal to close in the "next few months."

Magna and Sberbank will purchase a 55-percent stake in Adam Opel Gmbh and GM will hold 35 percent. The remaining 10 percent will go to workers.

"This is what the government wished," Merkel said. "Opel still has a difficult way ahead of it, but I trust the workers will take on the task."

Merkel said talks would be held with other countries where Opel has locations would be held in the coming weeks to ensure the burdens of restructuring could be share fairly. Germany's lead role in pushing the Magna deal led to fears it would seek to protect its workers first.

"It's possible now that GM and Opel will find a new way in Europe," she said. "We've taken a big step on the way ahead. We can have a new beginning."

Merkel's government favored the Canadian-Russian consortium's bid and offered $2.2 billion in bridge financing in May to keep Opel afloat. Magna has promised to keep all of Opel's German plants open.

GM has been trying to unload Ruesselsheim, Germany-based Opel since it ran into severe financial trouble earlier this year. Industry analysts say the unit has too many employees and too much factory capacity for its sales level and its costs are too high.

But Opel and its engineers are also highly integrated into GM's global product development system, designing the underpinnings for its next generation of small and midsize cars.

The announcement came after months of wrangling over who was best suited to take on Adam Opel GmbH, a Germany-based automaker with factories in Poland, Spain, Belgium, Portugal and Britain, where it makes the Vauxhall brand.

"The hard work over the past two weeks to clarify open issues and resolve details in the German financial package brought GM and its board of directors to recommend Magna and Sberbank," said Fritz Henderson, GM's chief executive said.

"We thank all parties involved in the intensive process of the last few months — especially the German government — for their continued support that enables this new venture."

Henderson said GM will continue to work with Opel and Vauxhall to develop and produce cars, keeping Opel and Vauxhall as a part of GM's product development organization, "allowing all parties to benefit from the exchange of technology and engineering resources.

"The current portfolio of Opel and Vauxhall cars and the models in the pipeline are a strong basis for future success."

"Participating in GM's global technology development and purchasing organizations secures important economies of scale for Opel and Vauxhall and other GM brands," the statement said.

(From Associated Press)
Posted by PublicInformationProjects at 10:07 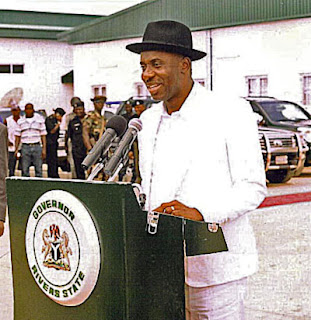 The rift between Association Of Nigerian Authors, Rivers State branch, also known as ANA Rivers and the Rainbow book club Port Harcourt, organizers of the annual garden city literary festival expected to take place from September 23rd to 26th, 2009 may mar the success of this year's event, chidi opara reports have reliably learnt.

The rift according to ANA Rivers and Rainbow book Club insiders started last year when Mrs. Koko Kolango, the founder of the book Club and facilitator of the festival against advice from ANA Rivers executives, scheduled the event to coincide with a programme planned by the Authors' body to honour one of its patrons, rtd. Captain Elechi Amadi during his 75th birthday anniversary, both events took place at the University Of Port Harcourt and had the governor of Rivers State,  Mr. Chibuike Rotimi Amaechi as guest of honour. ANA Rivers we gathered was listed as collaborators in the festival without being consulted. "Mrs. Kolango have not forgiven our chairman whom she accused of diverting her important guests to our own event", an ANA Rivers insider confided in chidi opara reports.

Further investigations reveal that Mrs. Koko Kolango, at the prompting of the Rivers State governor and ANA President, Dr. Wale Okediran made efforts recently to settle the rift, "so that ANA Rivers will also be listed as part of this year's festival atleast for the sake of credibility". We gathered also that Elechi Amadi was approached to reach out to ANA Rivers leadership, he consequently convened a meeting between the ANA Rivers chairman, Mr. Miesoinuma Minima and Mrs. Kolango at the Le' Meridian hotel Port Harcourt, in which both were advised to settle their differences and find ways to work together. "It was after that meeting that Madam instructed that we should reach ANA Rivers to find out where they can fit into this year's festival", a contact close to the Rainbow book Club founder informed chidi opara reports.

Even though there have been correspondences between the festival organizers and ANA Rivers in the past weeks, information at our disposal has it that ANA Rivers leadership is still not happy that the Rivers State government have been channelling all funds for the festival to the organizers leaving it out. ANA Rivers according to insider information is insisting on being paid a huge amount as "consultancy fee" in lieu of participation. We have not been able so far to confirm the exact amount. "All of these are as a result of personality clash between the ANA Rivers chairman and the book club woman. it is all about money", a top official of Rivers State Ministry of Culture And Tourism complained to one of our network members.

The festival organizers through one Iso Bassey told chidi opara reports that "ANA Rivers would also be part of this year's event". The statement also denied any rift with ANA or any of its branches.
Posted by PublicInformationProjects at 02:47