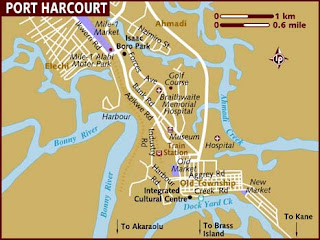 One of the enduring landmarks of Port Harcourt is the Military Hospital. It is located on sprawling grounds which straddle the low density Government Reservation Area (GRA), and Aba Road, the main trunk road that bisects the city. In yesteryears, it was dotted with flower gardens and trees that blossom all year long, spewing exotic fragrances which waft into the wards from a variety of tropical flowers. The ambience no doubt, aided the healing process. The hospital was built in the early sixties by Shell-BP, the corporate predecessor of today’s Shell Petroleum Development Company. Its original name was Delta Clinic, although it was a full fledged hospital and catered for the health needs of the company’s expatriate and Nigerian staff. Its well maintained lawns, long walkways, and quaint buildings are a nostalgic reminder of what the Garden City looked like.

Following the liberation of Port Harcourt in May 1968 during the Nigerian Civil War, the military took over strategic structures such as the Silver Valley Estate, owned by Mr. Rogers Halliday, the Port Harcourt Airport, Anglican Grammar School, Rainbow Town, Delta Clinic and a vast expanse of Ikwerre farmlands. The farmlands were converted to Bori Camp, Silver Valley Estate became the Garrison Headquarters, Port Harcourt Airport was turned into The Air force Base. Rainbow Town, a model low and medium income residential estate built by Eastern Nigerian Housing Corporation retained its name but became army barracks while Delta Clinic became the Military Hospital. Anglican Grammar was transformed into a Naval Base and the Nigerian Navy Secondary School.

Because of the strategic location of Port Harcourt as a seaport, railway terminus, and getaway to the oilfields of the Niger Delta, all branches of the nation’s security and defence apparatus are located here. The Army has the headquarters of the amphibious brigade, Airforce has a tactical command, the Navy has three major outposts at the Borokiri peninsula, Onne, and Rumuolumeni. The combined population of these formations is over 25,000. The Military Hospital is saddled with the task of taking care of the medical needs of these men and women in uniform and their families. Since after the Military “inherited” it from Shell nearly fifty years ago, no significant new structures have been added.

Serving in Port Harcourt these days is not a tea party. Officers and men from these units are responsible for safeguarding oil and gas infrastructure which account for the financial sustenance of Nigeria. They also form the bulk of the Joint Military Task Force (JTF) responsible for handling the peculiar challenges of the restive oil rich area. The place of choice for treating casualties is the Military Hospital.

In early July, while visiting a patient at the Military Hospital, I was shocked, even by contemporary Nigerian standards, to observe that when there was public power failure after dark, candlelight was the alternative source of illumination. In other words, routine and life-saving equipment if at all they are available, cannot be deployed to save the lives of anyone wounded on active service. Since after that visit, I now cast a glance in the direction of the Military Hospital each time I drive by at night. As I write this in the second week of September, more often than not, the place is in pitch darkness.

Whatever the nation’s defence priorities are, the Military Hospital Port Harcourt must have a functional Accident and Emergency Unit, Trauma Centre, Burn Centre, Operating Theatres, Radiology, Pharmacy and Intensive Care Units. Uninterrupted power supply must be guaranteed before these units can be deemed to be available. If these and other ancillary departments are not functional even for five minutes due to power outage, then the Military Hospital Port Harcourt is not even worthy of being called a mere consulting clinic.

Could it be that the import, relevance, necessity, and inevitability of having a full-fledged functional military hospital is lost on the powers that be in Nigeria? Can vital infrastructure be protected by maimed, ailing, or half-fit officers and men? If the answer to any of the above is yes, then our main source of income is in imminent danger.

I am constrained to draw a parallel between the Military Hospital and the Niger Delta Development Commission, an institution, whose plight saddens me immensely. The latter, being an intervention agency is the arrow-head of the efforts of the Federal Government to develop the Niger Delta, the goose that lays the golden egg which sustains Nigeria financially. Established with good intentions, it is perpetually hamstrung by paucity of funds. It is difficult to see what miracle the newly inaugurated Board of the Commission can accomplish, their enthusiasm, commitment, experience, expertise and antecedents of professional and personal competence not withstanding.

While in the last three months over 150 billion naira has been approved by the Federal Executive Council for various projects in Abuja (70 billion naira for expanding the airport road, and 84 billion naira for infrastructural development in the outskirts), NDDC which caters for nine states is to receive 120 billion naira in 2010 budget, which comes to an average of a mere 11.3 billion per state per annum. This is less than the 11.5 billion naira which the People’ Democratic Party (PDP) gleefully announced recently as the cost of building a befitting National Secretariat.

Could it also be that the import, relevance, necessity, and inevitability of developing the Niger Delta through the NDDC is lost on the powers that be in Nigeria as seems to be the case with the easily solvable problems of the Military Hospital?

Funds earmarked, budgeted, appropriated and approved for the NDDC totalling over 320 billion naira, have, for whatever reason, not been released over the years. Neither litigation by Youth Groups, nor the hoarse voices of crusading citizens have pried these funds from the inexplicable self-destructive vice grip of bureaucracy and politics. A government that can fork out 420 billion naira in a twinkling of an eye to salvage five privately owned banks so as not to endanger the banking grid can certainly cough out 320 billion naira to safeguard the all-important oil and gas industry. I strongly recommend that a minimum of 200 billion naira out of this fund be used to create immediate skilled and unskilled manpower-intensive public service jobs. Just the announcement of this initiative will disperse the pervasive ominous clouds blighting the Niger Delta and Nigeria as a whole. To borrow a phrase from Barak Obama’s inspiring concept, YES WE CAN.

It is incumbent on VP Goodluck Jonathan, Godwin Abbe, Rilwanu Lukman, Ufot Ekaette, Diezani Alison-Madueke, Odein Ajumogobia, Lamido Sanusi (who by the way looks spiffy in his Niger Delta regalia), John Odey, Godsday Orubebe, Dora Akuyili, Mansur Muhtar Michael Aoondoaka, David Mark, and Dimeji Bankole to exert in their personal and official capacities, the extra effort required to release the stalemated Niger Delta people’s funds due the NDDC forthwith. This can be done before the end of the sixty-day amnesty/ceasefire window of opportunity, the verifiable result of which is increased production of oil and gas and improved revenue inflow.

As for the Distinguished Senators and Honourable members of the House of Representatives especially those representing Niger Delta constituencies, need they be told?