As Nigeria Wobbles To 49: ARG Ask For A New Template(News Release) 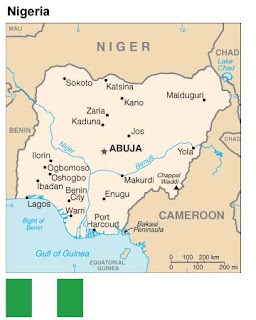 Afenifere Renewal Group (ARG) using the occasion of the 49th Anniversary of our “fumbling and wobbling” as a country to rally the constituent units of Nigeria to ask for a paradigm shift that would usher in true Federalism as a panacea for development and national rebirth.

In most of the 49 years of our existence as a country, we have abandoned the route that any multi-ethnic country like Nigeria should take by adopting over-centralization in a supposed Federal Republic.

At a time when the British who amalgamated us have gone to adopt water tight Federalism that has seen Scotland and Nigeria simultaneously submitting bids for the Commonwealth Games and the former centralized States of the Eastern block dissolving into cultural units, Nigeria has continued to move farther into a unitary arrangement.

It is no accident that at 49, all the failures of over-centralization manifesting in corruption, waste, inefficiency and collapse are staring us on our faces anywhere we turn to. Every institution that is “National” are either totally collapsed or are in the process of doing so. A few examples: Nigerian Telecommunications (NITEL), Nigerian Railways Corporation (NRC), Nigeria Airways (NA), Nigerian National Shipping Line (NNSL), National Electric Power Authority (NEPA), Nigerian Police Force (NPF), are sufficed to convince us that we are doing the wrong thing.

The template of Abuja insisting on running virtually everything that touches on the lives of the peoples of Nigeria has seen a situation where the whole country now reels under the paralysis occasioned by the incompetence of an over-bloated centre. Nigeria is about the only known “Federation” in the world where the central government has residual powers. A whopping 68 items are loaded on the exclusive list by the 1999 Constitution which put the lives of Nigerians under incompetence and failure.

The central government for instance has reached its cul-de-sac on provision of electricity but all the States can do today is to power a few streets with solar or generators at night as they must not touch exclusive matter. The whole country is today under the siege of armed robbers and kidnapper as an ill-equipped Federal police appears helpless but the States constitutionally cannot have their own police except the daring Sharia States who have introduced the Hisbah.

The Central Government forcefully took over Universities that were owned and well run by the regions in the past but today, all have been run down necessitating incessant strikes by University teachers and workers. Nigerians pay through their noses to fuel their cars because the Central Government has lost the capacity to refine even a barrel of crude oil but petroleum and allied matters remains in the grips of an incompetent centre.

Of late even football that has provided some opium for Nigerians has come under the weight of this incompetence. Where club sides like Enyimba have continued to at least provide occasional cheers, all the national teams have become embarrassments to soccer lovers.

All the above may look theoretical but the figures are there for us to capture the reality of our situation. At 49, 76% of our populace are classified stark poor, 300 of 1,000 children born in our country don’t celebrate their first birthday, the life expectancy for males is 45 and 48 for females, over $300b out of $800b we have generated since independence have been stolen by leaders and the sixth largest producer of oil in the world ranks among the last 20 in virtually all international indices for 148 countries. Above all we are classified among the 15 countries whose failure is imminent.

It is out of realization of this malady that CHANGE NIGERIA, which Afenifere Renewal Group (ARG) support, recently came out to put strongly the restructuring of Nigeria into a true Federal arrangement on the front burner. We endorse that declaration and call on all the constituent units of Nigeria to back it so that we can have a fresh start and run a Nigeria that works for all as against only a few presently. In that lies the redemption of our country.

We need to banish corruption and have a credible electoral process but these lofty goals would remain unattainable for as long as we are stuck with the structure that can only thrive on corruption and negation of the popular will of the people. 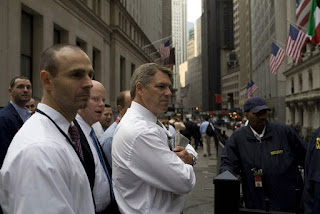 A Typical Workday On Wall Street

On Telegraph Avenue in Berkeley, CA, a sign in a store window reads, “Psychic Readings: 2 for the price of .” A street vendor barks at me, “I’ll give you a tarot reading for two bucks!” and a sandwich board advertises a “Free Psychic Fair” to attract new customers. Even psychics are affected by the downturn in the economy. Then again, Sylvia Browne still claims there’s a wait of up to eight years for her psychic readings, at a cost of $800. Asked when the economy might begin to recover, Barack Obama told the Washington Post earlier this year, “I don’t have a crystal ball. Nobody can tell.” But some people think they can.

In the current economic climate of the recession, sub prime market foreclosures, the credit crisis, and mass unemployment, are psychics affected negatively by these factors, or are they actually profiteering (propheteering?) from them? Many industries are suffering, and it’s likely that psychics are too, but some allege that the economic bust has led to a psychic boom.

According to several news sources, including USA Today, Time, and ABC News, new trends have appeared in the psychic industry over the past six months. Apparently, there are more clients, more psychics, different clients, and different client concerns. These sources explain that, during times of “uncertainty” about the future, people seek those who claim to “know” the future, and that as a result, psychics have experienced an increase in clientele.

With a greater demand for psychics, supposedly there is also a growth in the psychic job industry. Given current unemployment rates, it’s possible that psychic jobs are appealing as tax-free, unskilled, remote work; and given inflation rates, they may appeal as second jobs.

If we are to believe these anecdotal accounts, the once “staple” female demographic now includes male clients. The sources further report that there is a change in client concerns; namely, a shift away from relationship advice-giving to a focus on career and money, reflecting the current employment and financial strife. Finally, some psychics believe that their new clients are from higher socio-economic brackets, often with backgrounds in finance.

It appears that psychics have skipped the MBA and securities training to become amateur financial advisors for failing financiers and customers who are now distrustful of orthodox financial services. In the articles cited above, one psychic claims she charges $350 for financial advice to individuals, and $10,000 for corporations.

Some try to close the gap between trading futures and reading futures. There’s Arch Crawford, “The Street’s Best Known Astrologer,” who believes in not only bulls and bears, but Aries and Pisces. Then there’s Mary T. Browne, better known as “Wall Street’s Psychic Advisor”. Henry Weingarten, author of Investing by the Stars, is a “financial astrologer” (or “corporate astrologer”) who uses a “top down approach” (i.e. astrology) to the stock market.4 Amazingly, they all claim to have predicted gold as a stable investment (although gold is traditionally an alternative investment to currency in such times.)

Some psychics have found a new niche as real estate gurus. If you’re lucky, you might find a real estate agent who is also psychic! To sell your home in this difficult market, California psychics recommend the use of a psychic-approved real-estate agent; and that the seller apply the principles of Feng Shui to improve the “energy” of the house. Don’t forget to bury a statue of St. Joseph upside-down in the back yard!

At this point you could be tempted to joke, “At the moment, psychics couldn’t do any worse than the analysts!” Yes, they can. Here are a few examples. The telecommunications company One.Tel (a venture funded by the Murdoch and Packer heirs) Feng Shui-ed itself out of business. A change management consultant (and white witch) cost a local government over $800,000 with her advice based in eastern religion and astrology.

Recently, a banker gambled up to $109 billion on the stock market, and lost $7.7 billion, relying on advice from psychics in what was euphemistically called a “high risk strategy.”

Some psychics deny that they offer financial advice, and defend their craft as based in practical advice and common sense. However, there’s nothing rational or logical about unqualified strangers advising “clients” on life-altering decisions, based on gut-feelings, emotions, hunches, hopes, and intuition. Ironically, these are the very impulses that have contributed to the current economic crisis.

By: Karen Stollznow
Posted by PublicInformationProjects at 04:14