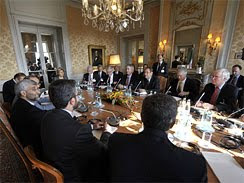 The U.S. and five other world powers began high-stakes talks Thursday with Iran to demand a freeze of its nuclear activities, with a senior U.S. official saying Washington is open to rare one-on-one talks with Iranian diplomats.

The EU's Javier Solana, who is formally heading the one-day negotiations with chief Iranian negotiator Saeed Jalili, was upbeat before the start of the talks in an 18th century villa in Geneva.

CBS News correspondent Elizabeth Palmer reports that this is the first time there have been serious, official talks between Iran and the United States in 30 years, and American diplomats, speaking off the record at least, have very modest, but realistic expectations.

A bilateral meeting with Iran would reflect Washington's determination to get results from the meeting. The U.S. official who told the AP that Washington was willing to hold the one-on-one talks spoke on condition of anonymity.

The fact that the meeting is taking place at all offers some hope, reflecting both sides' desire to talk, despite a spike in tensions over last week's revelations by Iran that it had been secretly building a new uranium enrichment plant.

Yet Tehran's acknowledgment that it had kept silent on the plant - which can make both nuclear fuel and fissile warhead cores - has left the Western powers with only modest expectations about the success of the talks.

Palmer reports that the most tangible indicator of "success" after Thursday's meeting will be a scheduled follow-up round of negotiations by the same parties. If Iran and the Western powers can't agree to that, it will have been largely a failure.

"This will be an agenda-setting meeting. If it's a success, they will talk today to set out a plan for how to keep talking," explains Palmer, reporting from the site of the summit.

While the West fears that Iran's nuclear program aims to make a bomb, Iran insists the program is strictly for peaceful use and has refused to negotiate any limits on it.

Palmer reports that the Obama administration and Solana are aiming for an eventual "freeze for freeze" deal, which would see Washington drop it's push for further sanctions and Iran halt expansion of it's nuclear enrichment program - not a total freeze of the nuclear program, just its growth.

There does seem to be some "wiggle room" between the Iranian regime's stance and that of the United States and its allies. Palmer says the White House's implicit acceptance of Iran as a nuclear powered state - with the right to enrich fissile material on their own soil, may provide key in the negotiations.

A senior Obama administration official told Palmer ahead of the talks that an eventual deal could include an Iranian enrichment program inside Iran, provided that it was well-monitored by international nuclear authorities.

Palmer, who has covered Iran extensively in recent years and travelled to the country on multiple occasions, says the Iranians genuinely seem interested in engaging the international community in these talks. "They don't want to be the ones to adjourn and walk out. They are too aware of pressure at home."

If the talks do fail, the U.S. and its Western allies are expected to renew their push for a fourth set of U.N. Security Council sanctions.

In addition to the United States and Iran, the countries meeting Thursday include members of the U.N. Security Council and Germany. The U.S. delegation is headed by William Burns, the under secretary of state for political affairs.

The State Department stressed its hope that the session would open the door to more in-depth dialogue about ways Iran could alleviate concerns that its emerging nuclear program may be secretly developing nuclear weapons.

State Department spokesman P.J. Crowley also said an agreement among all parties in Geneva to future meetings will be key. "That process will take some time," Crowley said in Washington. "We're not going to make a snap judgment on Thursday. We're going to see how that meeting goes, evaluate the willingness of Iran to engage on these issues."

Russia's U.N. Ambassador Vitaly Churkin, asked what Moscow hoped from the talks, said: "To have a start that has a continuation."

Chinese diplomats have also been urging Iran to negotiate with the six powers, U.N. diplomats said, speaking on condition of anonymity because they were not authorized to speak publicly.

Crowley noted that President Obama has said he intends to take a few months to assess Iran's position and consult with negotiating partners before deciding what next steps to take.

Diplomats at U.N. headquarters in New York said there has been no discussion of a new sanctions resolution. Several said they wanted to wait for a report from the U.N. nuclear agency on its inspection of Iran's newly disclosed nuclear facility and to see Tehran's response to the incentives if it starts negotiations.

In Tehran, President Mahmoud Ahmadinejad said the talks will gauge others' respect for Iran's rights.
"This meeting is a test to measure the extent of sincerity and commitment of some countries to law and justice," Ahmadinejad said Wednesday, according to official IRNA news agency.

The U.S., Britain, France, Russia and Germany are being represented by senior officials. Only China, which appears most opposed to new U.N. sanctions on Tehran, is sending a relatively low-level representative.

A U.S. government official confirmed to The Associated Press that commercial satellite images taken of the purported nuclear site near Iran's holy city of Qom are generally accurate.

At least three private sector imagery analysts in the United States have focused on the site because it fits the description given by the U.S. government: it is 20 miles from Qom, it is built into a mountainside and it has features consistent with a secret nuclear facility, parts of which the U.S. government says are underground.

Neither the U.S. government nor Iran has officially confirmed the location or the accuracy of the commercial imagery analysis.

At best, Thursday's talks could start lowering passions over the hidden plant, Iran's three-year defiance of the U.N. Security Council's enrichment ban and Western assertions that Tehran is a supporter of terror - and lead to another meeting later this year.

That, in turn, could be the start of a process that could not only end the threat of an Israeli or U.S. strike against Iran's nuclear facilities as a last resort. It could ultimately lead to an agreement on a limited Iranian uranium enrichment program - but under tight international control meant to banish concerns that it could be turned toward making warhead material.

Such hopes are tenuous. Since the five nations first proposed political and economic concessions to Tehran for a full stop to its enrichment activities three years ago, Iran has expanded the program. It now has more than 8,000 centrifuges set up in its cavernous underground facility at Natanz, with most working to churn out fuel-grade enriched uranium.

The initial set of U.N. sanctions in 2006 focused on banning trade with Iran in materials, equipment, goods and technology that could contribute to Iran's uranium enrichment program. Iran says its program is intended to provide fuel for civilian power reactors, but the U.S. suspects it could be used to make nuclear weapons.

U.N. sanctions against Iran were expanded in March 2007 by banning arms exports from Iran and imposing a freeze on the financial assets of 28 individuals and entities. More sanctions in March 2008 restricted the import by Iran of dual-use technologies - those that can be used for both civilian and military purposes.

(From Associated Press And CBS)
Posted by PublicInformationProjects at 09:18 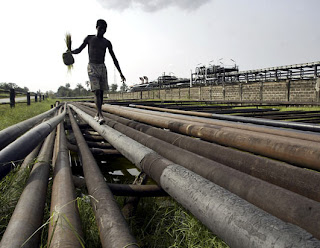 About seventy-two hours to the expiration of the amnesty proclaimed by the Nigerian President for the re-intergration of repentant oil militants, chidi opara reports network members report that there is tension in the Niger Delta region where the oil militants are based. The amnesty programme which started on 6th August, is expected to end on October 4th.

The main oil militant group, Movement For The Emancipation Of Niger Delta(MEND), about forty-eight hours ago raised a team of negotiators, which it tagged "Aaron Team". In an e-mail sent to chidi opara reports and some other news media organizations, MEND announced the Nigerian nobel lauret in literature, Professor Wole Soyinka and others as its negotiating team. The reaction of the Nigerian government to this development is not yet clear at the time of preparing this report.

This tension is mainly as a result of the reluctance of MEND and its top commanders and affiliate groups to embrace the amnesty, at the time of preparing this report, no MEND top commander or affiliate group have surrendered arms except "General Boyloaf", who contacts close to him whispered to us that "he is begining to regretting his decision to embrace the amnesty."

A top level contact in the government's adhoc security apparatus in the Niger Delta region, the Joint Taskforce On Security(JTF) informed chidi opara reports of  "discreet deployment of men and armaments in the creeks, in the event of another so called oil war".

A contact in the camp of  Mr. Tom Ateke told us that, "we are preparing and watching".

A citizen reporter have also sent in report of  "recruitments and purchases of arms by MEND",  she also reported that MEND's former foreign mercenary fighters "have been contacted for possible renewal of contracts". We have not been able so far to independently confirm this.

What we can confirm at this time is that there is serious debate in the Presidency as to whether the closing date of the amnesty should be extended or not. While a group of hawks, according to  reliable Presidency contacts, favour outright military campaign against MEND at the expiration of the october 4th deadline, a group of moderates prefer extension and dialogue with the oil militants.
Posted by PublicInformationProjects at 01:40