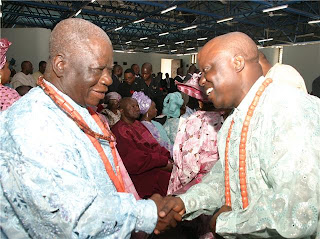 Edwin Kiagbodo Clark, Officer of  The Order Of Federal Republic (OFR) and Commander Of The Order of Niger (CON) at present is the “capo di tuti” of Nigerian polity, the ultimate Godfather that is hated and loved by all.


He is to what Adedibu was to South West Nigeria, while Adedibu was not lettered, Clark is a lawyer and a member of in , He is what Maitama Sule, Chiroma and Shagari combined are to the North, was a Federal Minister with these distinguished Nigerians in the 1960’s. has no parallel in the South-South region; he is simply referred to as the leader. Tony Annenih, Micheal Akhigbe, John Oyegun, Ogbemudia, Alabo Graham Douglas, etc enjoy doing “collabo” with him.

The President respects him while the Vice President revers and worships him; he fought Odili and Ibori to ensure that his kinsman, Dr. Goodluck Jonathan became the No. 2 man in . He is so feared that despite his attacks on Ibori, Ibori refused to join issues with or abuse him, but picked on lesser Obasanjo and Ribadu.

He cuts the exact picture of a godfather, he mostly love being pulled around sitting on a wheel chair for desired effects.

His residences, either in , Kiagbodo or are of sought for politicians, contractors, militants, jurists, Diplomats, Civil servants, even criminals.

What set Clark apart cannot be explained but give it to him that he has a good pedigree, his brothers distinguished themselves, Prof. J. P. Clark is respected in literary world, Ambassador B. A. Clark rose to the pinnacle of his career as the Permanent Secretary of Ministry of Foreign Affairs and was Nigeria's Permanent Representative to the United Nations, his other brother retired as a General in the Nigerian Army.

Clark is well organized with trusted aides and unlike others you will hardly see any of his numerous children around him but choose to relate with young and vibrant professionals, one of them is Dr. Mike Oberabor a medical practitioner who is Clark's personal physician. In Clark’s court one cannot miss him consulting with the seasoned Journalist and Vanguard columnist, Donu Kogbara. Donu recently resigned her appointment with NNPC over ’s disagreement with Dr. Rilwanu Lukman’s style of administration. Dr. Toru Ofili, Wing Commander Biakpara, ex-military administrator, Dr. Ikhime, ex-militant, Dr. Okoni are also member of E.K.C. cabinet, although an accomplished lawyer, Clark retained the service of the young prodigious lawyer and human rights activist, Kayode Ajulo as his personal lawyer while still enjoying the service of other lawyers.

Residents of the prestigious and serene Asokoro District in Abuja will not forget in a hurry the several exotic cars on display, which stretched to the end of .

Photonews: Behold The President's Next Son-In-Law! 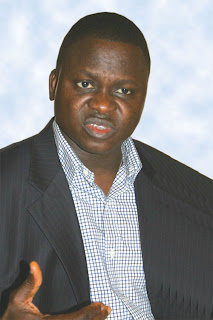 Unconfirmed information reaching chidi opara reports has it that Mr. Timi Alaibe, Presidential Adviser on Niger Delta Affairs, whose wife died not long ago is about to take one of the President's daughters as wife.

Observers believe that this is one of Alaibe's smart moves to consolidate his bid to becoming the next governor of Bayelsa State.

(From A Citizen Reporter)
Posted by PublicInformationProjects at 06:45