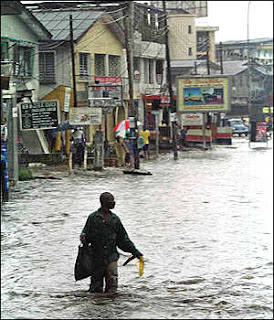 Alarmed at the deluge that ravaged Lagos last week, the Democratic Peoples’ Alliance (DPA) has asked the state government and the Federal Government to set up a counterpart funding scheme for tackling the menace of flooding in Lagos.

DPA noted that the state government appeared to have lost the battle against the problem, and warned of an environmental calamity waiting to happen.

“What happened last week denotes a natural catastrophe in the making in Lagos, and all hands must be on deck to stave off the disaster. We demand a collaborative scheme, akin to the interventionist programmes jointly sponsored by the Federal Government and state governments to tackle environmental problems of desert encroachment in the North and erosion in the South-East,” the party said in a statement by its Director of Publicity, Felix Oboagwina. “This state is long overdue for a special counterpart scheme between Abuja and Alausa specifically for deflooding Lagos.”

According to the party, the state needed the kind of successful collaboration the Federal Government and Lagos forged to tame the Atlantic Ocean’s surge on the Bar Beach.

The party wondered at the seeming ineffectiveness of the various schemes packaged by the state since Action Congress (AC) operatives came into power in 1999, including Drain Ducks, Highway Managers and World Bank-funded schemes, among others.

Warning that the state must stop mouthing excuses like global warming and poor sanitary conditions, for Lagos flooding, DPA said: “Clearly, the state government has found no answer to this distressing problem, and appears to have lost the initiative. What is needed now goes beyond political loyalties. Everybody has a stake in Lagos because everybody has a relation in Lagos. It is not for nothing that Lagos is called the nation’s commercial capital. So the Federal Government must come in to help.”

Recalling the devastation of last week’s deluge, the party statement noted that virtually every part of metropolitan Lagos was submerged under water, with vehicles and human traffic finding movement completely impossible in some cases. Particularly affected were Federal highways like Ikorodu Road, Apapa-Oshodi Expressway, Maryland, Apapa-Tin-Can Expressway, Apapa-Badagry Expressway and Oworonshoki end of the Third Mainland Bridge, and state-controlled major roads like Kirikiri, Lawanson, LUTH- Idiaraba, Liasu Road and Ejigbo amongst others.

“Business was paralysed. People could not make it to their offices and businesses. Those who made it there could not return home at the end of business hours,” the party said, noting that, “In some instances, children and even adults have been lost in floods in Lagos, except that such occurrences have been under-reported or unreported. Properties and vehicles were damaged and houses fell.”

Observing that staff of the Lagos State Ministry of the Environmental usually pinned the blame on refuse dumped in drains and waterways, the party counseled, “in such cases, the local government should take up the task of clearing refuse from the drainage.. In addition, the state must consider picking up the bills for refuse management and stop commercialisation of waste disposal by private sector participation (PSP) operators. People should be able to dispose of refuse free of charge.”

In the words of the party, “Sometimes, we want to insist on charging for such services because that is what obtains abroad, while we forget that some structures must be in place before those foreign authorities could impose those demands on their citizens.. For example, overseas, dump trucks drive up to the front door to pick up rubbish. But over here, where are the roads for such heavy-duty vehicles, yet the government goes ahead to ban truck-pushers?”

DPA similarly pinned the flood on several demolitions and drainage clearance embarked upon by state agencies, which afterwards failed to clear the resultant debris.

The factionalization which we learnt was caused by the re-entry of the state governor, Dr. Ikedi Ohakim into PDP, have split the party into two major factions namely: "New Face" and "Alliance". Dr. Ohakim won the governorship election on the ticket of the Progressive Peoples' Alliance(PPA). He was however, a member of PDP prior to joining PPA.

Insiders also revealed to chidi opara reports that even though there used to be groups like "Destiny" led by Mr. Ifeanyi Ararume and "Onongono" led by Mr. Achike Udenwa, these were mere informal groups.

"All that changed when Ohakim re-joined our party", one PDP insider from Ikeduru Local Government Area told one of our network members at Ihodimeze, the Headquarters of the Local government Area.

According to this insider, when Ohakim re-joined PDP "with the sole aim of securing ticket for second term", he formed the group "New Face" and induced topshots like Emmanuel Iwuanyanwu, Arthur Nzeribe and Kema Chikwe to join.

We also learnt that Ararume, who still has his eyes on the governorship of the state, because of this development settled his differences with Udenwa, this resulted in the merger of "Onongono" and "Destiny" into one group now known as "Alliance".

Independent investigation by chidi opara reports however revealed that although "Alliance" does not boast of many big names like "New Face", most of whom we discovered are in the group because of patronages from government house, it enjoys more grassroots support. A state PDP official who declined to be named believes that "Alliance" would sweep the January 2010 local government election, "if it is free and fair".

We also discovered that in the meantime, appointments into strategic positions, including the membership of management committees of local government and development areas are dominated by members of "New Face", this is said to be causing serious rancour in the state PDP Chapter.

Major opposition parties in the state like the All Progressives Grand Alliance(APGA), Action Congress(AC), Progressive Peoples' Alliance(PPA) and All Nigeria Peoples' Party(ANPP), are said to be getting ready to expolit the present factionalization in PDP for their respective advantages.
Posted by PublicInformationProjects at 04:11