News Release: Yoruba Group Lauds Conviction Of Bode George And Others, But........ 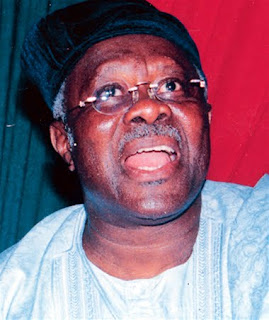 After a long lull of warfare without tell-tales, the anti-graft war in recorded major casualties on Monday with the conviction of former deputy-National Chairman of the Peoples Democratic Party (PDP), Commodore Olabode George and five accomplices.

In a moment of bold and courageous judicial pronouncement, Justice Olubunmi Oyewole passed a guilt verdict on George, former Chairman of the Nigerian Ports Authorities (NPA) alongside Aminu Dabo, O. Abidoye, Abdullahi Tafida, Zanna Maidaribe and Sule Aliyu; and sentenced them to two years each of the seven-count charges of abuse of office and six months each for the other 27-count charge of disobedience to constituted authority.

The six convicts are to spend the next 30 months in Kirikiri prison for their criminal conducts during their stewardship at the Nigerian Ports Authority under the administration of Gen. Olusegun Obasanjo whose name has also featured in various financial scandals but has yet to be brought to the temple of justice.
For a country suffused in moral decadence in public office where criminals have become celebrities and protection of corrupt people from justice has become a direct policy of state, the jailing of George by the judge has brought some catharsis albeit with cautious praise for the judiciary.

Afenifere Renewal Group (ARG) joins millions of Nigerians to laud Justice Olubunmi Oyewole for his diligent judgment where he stated inter alia "When public office is abused, the entire system is assaulted. This must not be treated with kid gloves, if the quality of service in our public life is to be attained to an appreciable standard of the civilized world".
It is on the matter of "kid gloves" that many Nigerians have expressed disappointment with the judgment. They are of the view that 30 months in jail is too light for the kind of crimes Bode George and colleagues committed.

The angst is justified considering the fact that poor people who committed lesser offences have been visited with grave punishments. A few months ago, an official of the Lagos State Transport Management Authority (LASTMA) was sentenced to 4 years imprisonment for collecting a bribe of N10,000! It is the same that some poor folks lost their arms to Sharia judgments while one of the Governors who promulgated the Sharia law and has been charged to court for stealing N17b in one day is now sitting on the Anti-Corruption Committee of the Senate.

The above explains why judges are hampered in serving the just deserts to these high profile criminals as they are the ones who influence the making of the laws and build a soft-landing for themselves. The challenge this has raised is the need for an urgent judicial review for corruption to attract severe punishment- we are stopping short of the capital punishment which many of our compatriots are calling for out of sheer frustrations with the obscenities of our public officials.

It is quite appropriate to point out that another source of pessimism by our people is that for one Bode George and five accomplices who have just been sent to prison, there are hundreds of Bode George and thousands of accomplices who stroll in and out of the Villa, who are chief launchers at different occasions, who give public lectures about, who are splashed on the covers of soft-sell journals with all their frivolities and even serving in the present government at all levels.

We shall only take the anti-graft war serious if many more of such people are brought to book and quite expeditiously too. That it has taken roughly 14 months to conclude the trial of George and co shows clearly that corruption charges can be done with if the will is there.

ARG is equally worried like many of our compatriots that the verdict on George and co was silent on the acquisitions from the proceeds of these financial crimes. That may give more perverts the idea that they could still as much as possible, spend a few months behind bars and return to enjoin their loots. These were the same issue we raised when Lucky Igbinedion was fined N3.5m in a plea bargain without a full disclosure of what he forfeited.

The standard should be that once you are convicted of looting public funds, you should automatically forfeit to the state all the proceeds of such crime.

It would be incomplete if we failed to comment on the shameful conduct of PDP elements who stormed the Lagos High Court yesterday in assorted aso ebi to celebrate corruption with Bode George and even had the temerity to assault journalists who were doing their lawful duty. It becomes sickening reading the Southwest chairman of the PDP Alhaji Tajudeen Oladipo even castigating the judiciary as he told the Nigerian Tribune "We in the PDP reject the judgment in its entirety … How can somebody be jailed without an option of fine? We believe that Bode George is not guilty of the charges preferred against him". Didn’t their BOT chairman, Gen. Olusegun Obasanjo, declare a while ago that nothing embarrasses him? It is a pity that the Yoruba nation has also fallen under the rule of greedy dogs who don’t understand shame!

On a final note, we call on Nigerians not to lose sight of the significance of what has happened no matter our reservations. And it is that no matter the odds we must never be tired of pushing against the empire of thieves in . In spite of all their shenanigans, our enduring and undying revolt will push them to kiss the dust one after the other: either by accident or design evil will always destruct or self-destruct. The forces of darkness shall not triumph for ever. will flourish once again.

And to the thieves across the six geo-political zones we say: the fall of George and the 5 is a sign for you that your day of reckoning beckons! 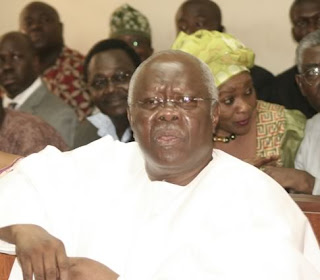 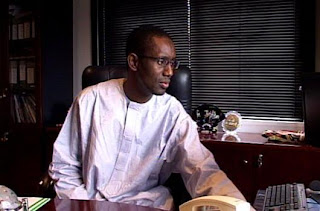 Nigeria's Peoples Democratic Party(PDP) Chieftain, Rtd Navy Commodore Bode George was yesterday sentenced to two years in jail because of fraud he committed at the Ports Authority while serving as a non executive chairman.

The probe was investigated by Mr. Nuhu Ribadu, the immediate past Chairman of the Economic and Financial Crimes Commission(EFCC).
Posted by PublicInformationProjects at 03:35 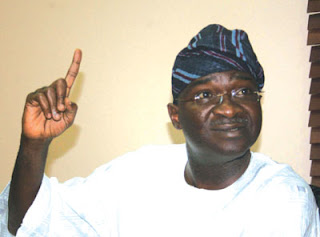 The Democratic Peoples’ Alliance (DPA) have given kudos to the Lagos State House of Assembly for wading into the controversy surrounding the €25 million (about N4.75 billion) Sunborn Yacht and the crisis in the Lagos State University (LASU).

However, the party warned the House against sweeping the reports under the carpet as happened with the stalled 2007 probe of local government executives, a report that never saw the light of day.

In a statement by its Director of Publicity, Felix Oboagwina, DPA said last week’s intervention signified the state legislators’ commitment to taking their oversight function seriously and defending the interests of the people.

Advising the State Legislature not to allow the salient issues of the two cases to be swept under the carpet in the name of party loyalty, DPA recalled that in 2007, the House’s Committee on Public Accounts (Local) had recommended the suspension of five Local Government Executive Secretaries for mismanaging N700 million council funds in three months, a probe that has remained buried with the punishment never carried out.

In the words of the party: “Lagos would have been better run with greater accountability and less impunity if the Executive had been held in check this way by the House. Such scrutiny by the House will further promote the checks and balances enshrined in the Nigerian constitution, curtail the excesses of the Executive and guarantee the survival of democracy.”

According to DPA, it was particularly important that Lagosians be told the real facts about the state’s involvement in the acquisition in February last year of the erstwhile London-based €25 million “Sunborn Yacht” renamed the “Lagos Yacht Hotel.”

“As at now, the whole affair of this 10-year-old fairly-used boat casts a serious credibility noose around the state government, especially as Tokunbo Afikuyomi, Commissioner for Tourism and Inter-Governmental Relations, representing Governor Babatunde Fashola at the contract-signing event held in London, and later at a Press Conference in Eko Hotel, where he told the Press that the project was ‘a Public Private Partnership (PPP) initiative’ and that the state government had beaten the cities of Doha and Dubai that had equally bid for the boat,” DPA said.

On the LASU affair, the party said it was clear that the university’s primary population had lost confidence in the institution’s current leadership.

DPA urged the House to compel the university’s administrators to practice internal democracy, and not follow the bad example of godfathers in the Action Congress in Lagos .

In DPA’s words, “LASU management must know that in a democratic and intellectual environment like a university, policies, programmes, planning and projects must be tailored to meet the greatest good of the greatest majority. In very clear terms, the House must tell LASU administrators to shape up or ship out.”

Meanwhile, the party has urged the Lagos State House of Assembly to scrutinise the Human Rights records of the state government over allegations of illegal detentions and inhuman condition of suspects arrested by various agencies.

Other matters of urgent public attention the party felt required legislative focus include: The pollution of the Alimosho General Hospital, Igando and its environs by effluents from a neighbouring solid-waste dumpsite; the illegal selling off of Lagos properties to private interests; the coroner law; the dilapidated state of Lagos roads; insecurity; etc.