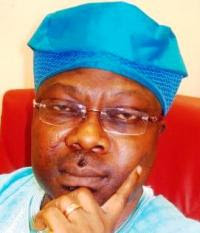 A citizen reporter from Ibadan, Oyo state just reported that the election of Senator Iyiola Omisore of Osun state have been nullified by the Court Of Appeal siting in Ibadan today.

The court, according to the report, ordered for a fresh election in sixty days.

Omisore was elected senator for a second term in 2007 on the platform of Peoples Democratic Party(PDP).
Posted by PublicInformationProjects at 09:52