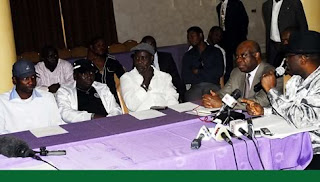 Insiders in the Movement For The Emancipation Of Niger Delta(MEND) have informed chidi opara reports that the armed group which organized series of  "oil wars" that almost crippled the Nigerian mono-economy may still resume hostilities despite having recently declared indefinite ceasefire. Oil is the mainstay of the Nigerian economy.

"That indefinite ceasefire was declared to honour our leader, Henry Okah, who is discussing with the federal government", a former MEND fighter who claims to be a diamond trader now in Sierra Leone told us in an online interaction. "But right now, it seems our leader is not happy with the way things are going", he concluded.

chidi opara reports network members in Abuja reported that fraustration is fast creeping into the camp of the former militant leaders currently holding post amnesty talks with government officials. Reports have it that most of them have been heard grumbling openly about the slow pace of the talks. We learnt also that most of them had complained to Henry Okah,  whom they still regard as their leader.

A contact close to Mr. Okah told chidi opara reports in another online interaction that "Henry is under pressure from those boys, he has to speak up or they will think he has collected money or contract from the government". Mr. Okah was alleged to have alluded to possible collapse of the just concluded amnesty proclaimed by the Nigerian government for repentant oil militants in a recent interview with an international television network.

Citizen reporters have also filled in reports that there are still considerable numbers of armed militants in the creeks of  Rivers, Bayelsa and Dellta states. This information could not be independently confirmed at the time of preparing this report.

Reliable accounts emerging from the venues of the post amnesty talks has it that some influential members of the government team are not happy with the demands of the former militant leaders whom they accuse of being teleguided by some Ijaw leaders. "We know that some so called Ijaw leaders are teleguiding them" a member of the government team commented in an unguarded moment at a high brow restaurant in Abuja during a break in one of the sessions.  " If we accede to all that they were asking for, with which resources will the country be governed?", another team member asked. chidi opara reports is so far not privy to the demands of the former militant leaders.
Posted by PublicInformationProjects at 00:29