Revealed: Plan To Get Nigerian Ruling Party Chieftain Out Of Jail 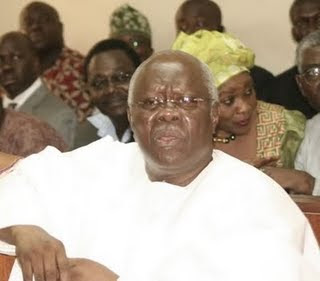 chidi opara reports have reliably learnt that there is high possibility of review of the prison term handed to rtd. Navy commodore Olabode George and five others for mismanaging the finances of the Nigerian Ports Authority(NPA) during his tenure as a non executive chairman of the Authority by an Ikeja High Court presided over by Justice Olubunmi Oyewole. George and his accomplices have filed appeal against the judgement at the Court Of Appeal.

We also learnt on good authority that even though the prosecuting agency, the Economic And Financial Crimes Commisson(EFCC) had cast iron case against George and his cohorts, "the conviction", according to a well placed government insider, "could not have been possible if not that oga George decided to work against Mr. President's second term bid".

Knowledgeable PDP insiders told us that George helped to execute the "Obasanjo project" so well that he was consequently made the National Deputy President of the party in the South-west. He was also in the committee that handled the re-election of Obasanjo in 2003, as well as the director-general of the committee that worked for the election of President Yar'Adua in 2007.

Rtd. Commodore George, according to other PDP insiders started having problem with the present party leadership and the Presidency mid last year when it became obvious that he was being sidelined in the scheme of things, even when such schemes were about Lagos, his home state. George, according to these insiders complained severally to Obasanjo and the President, but his complaints were reportedly ignored. "At this point the man stopped complaining and decided to join forces with Babangida to work against the President's second term plan", one PDP insider revealed to chidi opara reports.

Checks in security circles in Abuja revealed that when the plot to fraustrate the President's seond term bid was uncovered, a decision was taken by the President's kitchen cabinet to "deal with those behind the plot". Top on the list we learnt were Ibrahim Babangida, Olabode George, Anthony Anenih and some former governors and ministers. Babangida was reported to have called the President to deny the plot. He is also known to have been favourably disposed to the President's second term plan ever since, "to stave off harassments".

chidi opara reports can now reveal that associates of the jailed ruling party chieftain, "have made the right contacts". It is expected that these "right contacts" would use their influences to get George out of jail through the Court Of Appeal. Members of the President's kitchen cabinet are however reported not to be well disposed to this plan.
Posted by PublicInformationProjects at 06:24