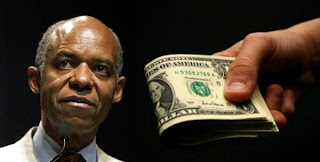 ALEXANDRIA, Va. – A former Louisiana congressman who famously stashed cash in his freezer was sentenced Friday to 13 years in prison for taking hundreds of thousands in bribes in exchange for using his influence to broker business deals in Africa.

The sentence handed down in suburban Washington was far less than the nearly 30 years prosecutors had sought for William Jefferson, a Democrat who represented parts of New Orleans for nearly 20 years.

Agents investigating the case found $90,000 wrapped in foil and hidden in boxes of frozen pie crusts in his freezer.

Prosecutors had asked a judge to follow federal guidelines and sentence him to at least 27 years. The defense asked for less than 10 years, arguing a stiffer sentence would be far longer than those imposed on congressmen convicted of similar crimes in recent years, none of whom was sentenced to more than a decade.

Jefferson said nothing in court after he was sentenced. He was convicted in August of 11 counts, including bribery and racketeering. Prosecutors at his two-month trial said he took roughly $500,000 in bribes and sought millions more. He was acquitted of five other charges, including the one most closely associated with the money in his freezer.

The investigation started in March 2005. In August of that year, FBI agents searched Jefferson's Washington home and found the cash. Prosecutors said he had planned to use the money to pay a bribe to the then-vice president of Nigeria to secure a multimillion-dollar telecommunications deal there, an accusation Jefferson denied.

The money ended up in the freezer after a disgruntled businesswoman, Lori Mody, agreed to wear a wire after telling the FBI she had been cheated out of $3.5 million in deals brokered by Jefferson. The jury saw videotape of Mody handing over a suitcase filled with $100,000 cash outside an Arlington hotel. Most of that money was recovered from the freezer.

The defense argued that Jefferson was acting as a private business consultant in brokering the deals and his actions did not constitute bribery.

New Orleans voters had long been loyal to Jefferson, who in 1991 became Louisiana's first African-American congressman since Reconstruction. He rose from the poverty of the Louisiana Delta parishes to prominence as a street-savvy political tactician.

He was re-elected in 2006 even after news of the bribery scandal broke but was indicted and then lost to Republican attorney Anh "Joseph" Cao this past December.

(From Associated Press)
Posted by PublicInformationProjects at 08:21

On Tuesday, I participated in the ‘Ask U.S.’ live stream video question and answer session at the White House.

Samantha Power, NSC Senior Director for Multilateral Affairs, and I answered questions posed to us by Jerry Fowler, the President of the Save Darfur Coalition, and Layla Amjadi, the Student Director of Stand (the student-led division of the Genocide Intervention Network).

In the lead up to this event, the Save Darfur Coalition and STAND asked their members to both vote on which questions would be asked and to submit additional questions for consideration.

We are eager to continue an active and robust dialogue with the advocacy community, and this unique event allowed us to engage directly with thousands of members of the Save Darfur Coalition and STAND.

The questions that Jerry and Layla posed touched upon a range of pressing concerns, inquiring about the administration's benchmarks for incentives and pressures, the circumstances in which internally displaced persons in Darfur might return home, the risks surrounding the 2010 elections in south Sudan, the importance of engaging China and Russia on the path forward, and the indispensability of including Sudanese civil society in the peace process. I found the exchange to be extremely useful and hope those who followed it online did as well.