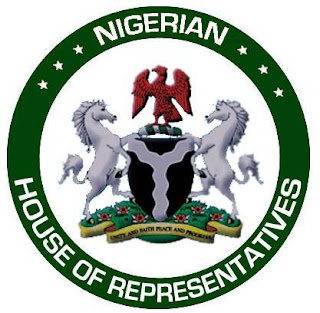 [Seal of House of Representatives]

Contrary to reports that the Nigerian Press and Journalism Practice Council bill currently undergoing processes at the House of Representatives is a private member's bill, indications have emerged that the bill actually originated from the Presidency.

Some knowledgeable Presidency insiders have revealed to chidi opara reports that fraustrations from failures to "cage" the "stubborn" Nigerian private media establishments with Libel suits, arrests and arraignments for Sedition, necessitated the proposed law from the office of the National Security Adviser(NSA). "As soon as the bill was cleared by the wise men, the next move was to get someone very credible to table it in the House". The "wise men" in reference here, we learnt, are members of the President's kitchen cabinet.

We also learnt that after the proposed law had been "fine tuned" in the office of the Attorney-general of the Federation and Minister of Justice,  a female senior Journalist, who heads a government owned news agency was contacted by the Minister of Information and Communication to reach out to Mrs Abike Dabiri-Erewa, a two term member of the House of Representatives on the platform of the Action Congress Party(AC), "to table the bill because of her reputation and professional pedigree".

Mrs Dabiri-Erewa when contacted, according to our information, requested to consult with one of the leaders of her party. chidi opara reports have not been able so far to independently confirm the name of the party leader whom Mrs. Dabiri-Erewa consulted. Unconfirmed information however, has it that the party leader is incidentally, the publisher of a prominent newspaper.

Further checks also revealed that opposition to the proposed media law from the media and civil liberties community was unexpected by the Presidency, "since the bill was tabled by a former Journalist with populist credentials".

This setback we understand have forced the Presidency into a subtle retreat. "The bill may be withdrawn or amended", a member of the House of Representatives known to be close to the Presidency and said to be secretly working with Mrs. Dabiri-Erewa on the bill was heard telling a colleague at the premises of the National Assembly.
Posted by PublicInformationProjects at 03:16 No comments: