Commiserating with the family of the elder statesman, Chief Fasoranti described his death as a great loss to the Yoruba race.

Pointing out that Otegbeye would be remembered for the nationalist struggle as championed by the Nigerian Youth Congress that he co-founded in 1960, Pa Fasoranti lamented that, “Otegbeye spent his life in the struggle, and died without his country reaching the Promised Land.”

Pa Fasoranti described the late octogenarian as a worthy compatriot, a great loyalist and an indefatigable subscriber to the progressive ideals of Chief Obafemi Awolowo.

“Otegbeye contributed immensely to the progress and development of the Yoruba race in general and Ogun State in particular,” Fasoranti said. “He will be particularly missed for his wise counsel, his gentle disposition, his politics without bitterness and his politics of inclusion.”

According to the Afenifere leader, Otegbeye proved not just a visionary leader of the Yoruba race, but even when he was at the receiving end of political misfortune, he proved so disciplined that he would bow to party discipline and majority will, Fasoranti said.

Pa Fasoranti enjoined politicians to learn from the late Otegbeye, who, he said, never subscribed to do-or-die politics. He also enjoined the people of Ogun State to keep alive the ideals of the late elder statesman who died in October. 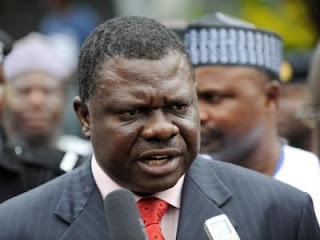 I have read and clearly digested the views of the Honourable Attorney General of the Federation and Minister of Justice Michael Aondoakaa (SAN) exhibited in several newspapers today in his reactions to my position as contained in my letter to the Federal Executive Council via the Secretary to the Government of Federation on the legal status of the decisions, approvals and contracts awarded by of the Federal Executive Council in the absence of President Umaru Yar’Adua as well as the proper interpretation of the enabling provisions of the 1999 Constitution.

I must first express and register my sympathy with the Honourable Attorney General on the fact that the situation he is facing presently is a sui generis in the history of our nation. I understand his view and what he stands to protect. Nevertheless, history would be reluctant to exonerate me if I fail to defend the grund norm of this country which as a citizen and a legal practitioner has all sacred responsibility to preserve and forbid some uninformed set of individuals and leaders to be torpedoed in its entirety.

Initially, I was very reluctant in joining issues with the proponent of the doctrine which upholds a strange and unhallowed tenets of a political culture that the President of our country can be operating the instrumentality and apparatus of governance from anywhere in the world. Sooner had I snubbed this weird doctrine than I woke up to the reality that my failure to address this issue may leave a horrific standard in political history of the nation I so much love and revered especially considering the fact that the doctrine is emanating from the office of the Chief Law Officer of the Federation.

A glance at the tenet of the proposition that the President of our country can be operating the instrumentality and apparatus of governance from anywhere in the world may sound reasonable but a closer look at the indepth of the assertion and the havoc it would cause to the spirit of our constitution make it illogical and awkward.

I therefore ask the question; Is the proposition saying that just any rogue can rush to Nigeria and in the usual way manipulate our election and rise to the position of president and afterwards want to do what Aondoakaa was saying, so fly away from the country and be ruling from anywhere in the word? Without any hesitation I say a capital NO to this question. In fact it is rhetoric. The answer is clearly manifested than the question itself. I must say that this is against the spirit and tenet of the 1999 Constitution of Nigeria.

I find it difficult to align with the argument of the AGF that Yar’Adua can work from anywhere in the word. The Constitution, in its sacred spirit, envisaged a situation where the president may intend to go outside the country for long time, then the grund norm in Section 145 is finding it knotty to tolerate the absence of President and thereafter prescribe the alternative for the president, and this alternative is contained in Section 145 of the constitution. Then, what else does our AGF want the Constitution to say.

Even when Section 148(2) was specific on the fact that the President should be holding regular meetings with the Vice –president and all the ministers of the government. Does the constitution want the president to be in Saudi Arabia and his ministers scattered all over the nations and are holding the necessary meeting expected of them from abroad? Are they shifting Nigerian Cabinet to Saudi Arabia? Is Aondoakaa saying that we should not compromise our sovereignty and allow our Aso rock to be shifted to Saudi Arabia? No

The jurisprudence of construction of constitution forbids interpretation from a narrow perspective but advance understanding of constitution from the entire intent of the maker. The makers of our constitution cannot mean that we should have president in Diaspora who should be ruling from abroad. No.

I therefore reinstate once more that the decisions and approvals done by the Federal Executive Council in the absence of the President are illegal, null and void as they run contrary to Section 148 of our Constitution.