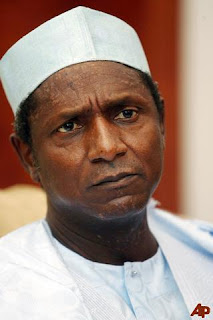 The Save Nigeria Group (SNG) comprising human beings with blood flowing in our veins welcome President Umaru Yaradua back to the country after 93 days of medical trip to Saudi Arabia.

But as citizens of Nigeria, we deplore in the strongest terms the way President Yar’Adua was smuggled into the country like a piece of contraband in the dead of the night and through mafia tactics by his kidnappers. Nigeria is portrayed like a medieval society where stone age (wo)men preside if a president who was away for 93 days could be brought back in secrecy and journalists and airport workers hounded by armed soldiers .

The reported parking of the aircraft that brought him in a bush path further showed that the cabal has no respect for Yar’Adua and would not give him the amount of care a sick dog deserves from the owner for as long as they use his sick body to feather their nests.

It is more curious that soldiers were deployed to the airport without the knowledge of the Acting President and Commander-in-Chief of the Armed Forces who was also not on hand to receive him.

When all is added up, it is clear that there is a sinister plot behind bringing a man who should be having his health attended to into the country. This has been evident in the fact that the Executive Council of the Federation has yet to commence its weekly meeting as we go to the press.

It has also been brought to our attention that a statement has been issued by Yar’Adua spokesperson, Mr. Segun Adeniyi to the effect that he has been discharged by his doctors and that the Acting President, Dr. Goodluck Jonathan should act for him while he recuperates. Was it a slip that Adeniyi referred to Dr. Jonathan as “Vice-President” and not Acting President?

This is clearly unacceptable and a further confirmation that Yar’Adua and his handlers see Nigeria as his supermarket, which explains why he did not hand over in the first place while traveling out on medical trip. The constitution does not confere on him the right to verbally decide how Nigeria is run.

Nigerians need to see the man who is making this statement. He must address the joint sitting of the National Assembly, even if it’s only for five minutes, which shall transmit power back to him before he can begin to function as president again. In the alternative, he should address the nation on NTA and AIT to explain to the nation why he failed to respect the constitution in the last 93 days.

Inability to do this automatically means he is totally incapacitated and his coming home would not have changed anything, as our quarrel with him was not the location where he was but the fact that we are not sure that his body and mind can support the functions of his office. This as far has been confirmed by the fact that it took one hour twenty five minutes to dislodge him from the air ambulance into the Ford Intensive Care Unit ambulance and another one hour ten minutes to take him from the airport to the secretariat junction in Abuja where he proceeded to the Villa. All these point to permanent incapacitation.

Flowing from the above, the SNG insists that the process of empanelling a medical board as stipulated in Section 144 must proceed forthwith. And the Executive Council of the Federation has its job cut out for it, as they now have no excuse to fall on anymore. There is no need for any jamboree as Yar’Adua is now within the shores of Nigeria.

We have insisted on this conclusive resolution of the crisis so that Nigeria can avoid the political disaster the cabal is setting Nigeria for. We remain resolutely committed to the logical closure of this matter and we stick to our March 3rd deadline.

Finally, we call on our people to remember Yar’Adua in their thoughts and prayers so that he will sooner regain his health and be free from the pernicious hold of the heartless cabal holding on to his life.