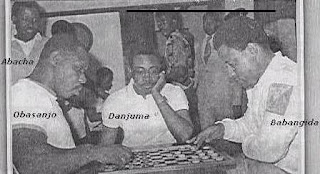 Indications have emerged that retired Generals Olusegun Obasanjo, Theophilus Danjuma and Ibrahim Babangida have decided to sink their political differences and work together.

The trio was in power from 1976 to1979. While Obasanjo held the post of Head of State, Danjuma was Chief of Army Staff and Babangida as a colonel was a member of the Supreme Military Council(SMC), the highest decision making organ of the Federation then. Babangida later became military President in 1985.

These retired Army topshots parted ways during the  second term of the Obasanjo civilian Presidency when conflicts arose in their political interests.

The Goodluck Jonathan (Acting) Presidency, chidi opara reports learnt have now brought them together. We learnt on good authority that bringing the retired Generals together was part of the Acting President's strategy to contain the influential and stubborn Yar'Adua group and consolidate power. Dr. Jonathan's ascendance to the position was opposed by the Yar'Adua group.

Contacts close to the Acting President have confirmed to us that Dr. Jonathan on transforming to the position held separate meetings with Obasanjo, Danjuma and Babangida. During the meetings, the Acting President was said to have impressed it on each of the retired Generals the need to place the peace and stability of the nation above personal interests and the need for them to work together in the nation's interests. These meetings we learnt was followed by another between the Generals in a guest house said to belong to one of Danjuma's companies at the Gwarimpa estate in Abuja.

"Very soon, the outcome of this rapproachment would start to manifest", a contact close to Obasanjo told one of our network members in Lagos. The first outcome of this re-union may be the recent appointment of Danjuma as Chairman of the Presidential Advisory Committee(PAC) and the re-appointment of retired General Aliyu Guasu as National Security Adviser(NSA). Security contacts have also confirmed to chidi opara reports that Gusau is very close to the trio.
Posted by PublicInformationProjects at 00:41 No comments: