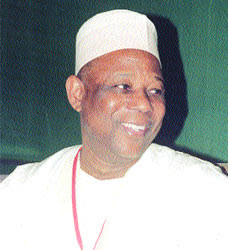 The dissolution of the federal cabinet by Nigeria's Acting President, Dr. Goodluck Jonathan on wednesday 17th march, 2010 after the weekly meeting of The Executive Council Of The Federation have the imprint of the newly appointed National Security Adviser(NSA), rtd. Lt. General Aliyu Gusau. Gusau was also the National Security Adviser till the later part of the Olusegun Obasanjo civilian Administration when he left to join the contest in the primary election of the Peoples' Democratic Party(PDP), which he lost to President Umaru Yar'Adua.

The cabinet dissolution, chidi opara reports learnt authoritatively was to be the first official assignment of the Acting President. "A disturbing security report" however, forced him to put the assignment on hold.

Strategically placed security contacts had informed us some weeks ago that the said security report painted a picture of a plot to take over government by a group of middle rank officers in the military. This group was alleged to have the backing of a group of International Oil and Gas tycoons with business interests in Nigeria.

Bent on asserting his authority, the Acting President reportedly reached out to the trio of Olusegun Obasanjo, Theophilus Danjuma and Ibrahim Babangida. They were said to have advised that Aliyu Gusau should be made the National Security Adviser to check any untoward security situation that may arise from the impending cabinet dissolution, although Babangida reportedly initially nominated Haliru Akilu, a former military intelligence chief, contacts said that he finally deffered to Obasanjo and Danjuma, his seniors during the years in service.

On assumption of duty, Gusau who is reputed to be one the best Intelligence experts in sub-saharan Africa and also said to have wide range of strategic contacts within and outside Nigeria, reportedly worked on these contacts. By 8.30 pm on monday 15th march, 2010, the spymaster was said to have turned in a report which stated in part that "potential troublemakers have been demobilized for now".

Armed with this report, the Acting President directed his media aides to schedule a national broadcast in which the cabinet dissolution would be announced for 9.00pm on thursday 18th march, 2010.

A high level security contact told chidi opara reports that the change was a last minute security measure also advised by the NSA.
Posted by PublicInformationProjects at 06:40 1 comment: