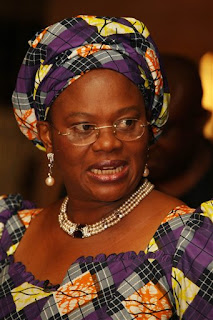 A last minute meeting initiated between representatives of Nigeria's immediate past Minister of Information and Communications, Professor Dora Akunyili, members of the Yar'Adua cabal and South-eastern governors by rtd. General Olusegun Obasanjo, Nigeria's immediate past President, have paid off. Akunyili's name have been included in the list of ministerial nominees before the Senate, bringing the list to thirty. Twenty-five names had earlier been submitted.

Following intense lobby to stop the nomination of Professor Akunyili by a combined team of lobbyists from the Yar'Adua group and South-eastern governors, the Acting President, chidi opara reports learnt had called Obasanjo, known to be pushing the Akunyili nomiation to alert him of the situation.

Further information has it that Obasanjo realizing the extent of the anti Akunyili campaign pleaded with the National Security Adviser(NSA), "to do something about the situation".

Professor Akunyili's representaives were said to have made promises of "good behaviour" on behalf of the controversial former Minister.

A Chinese Communist Party newspaper accused Google on Wednesday of colluding with U.S. spies, and said the firm's retreat from China over censorship justified Beijing's efforts to promote homegrown technology.

Google on Monday shut its mainland Chinese-language portal Google.cn and began rerouting searches to a Hong Kong site, over two months after it said it would not accept the self-censorship demanded by China's government, which is determined to keep a tight grip on domestic users' access to the Internet.

China's Foreign Ministry said on Tuesday it regarded Google's departure as the "individual act" of one company, and said the country remained welcoming of foreign investors.

But Beijing's response to Google's complaints about censorship and hacking has also echoed nationalist-tinged claims that Google and Washington used the dispute over Internet controls to challenge Communist Party authority.

"For Chinese people, Google is not god, and even if it puts on a full-on show about politics and values, it is still not god," said a front-page commentary in the paper.

"In fact, Google is not a virgin when it comes to values. Its cooperation and collusion with the U.S. intelligence and security agencies is well-known," said the newspaper.

"All this makes one wonder. Thinking about the United States' big efforts in recent years to engage in Internet war, perhaps this could be an exploratory pre-dawn battle," the commentary said of Google's pull-out.

The overseas edition of the newspaper is a small-circulation offshoot of the main domestic edition, and often makes bolder comments than the main edition.

( From Reuters)
Posted by PublicInformationProjects at 08:31 No comments: