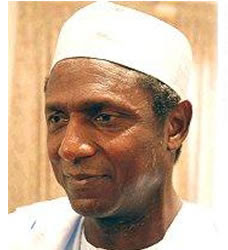 About fifteen "Alfas" have been attending to the health of Nigeria's sick President, Umaru Yar'Adua, since he was evacuated from a Saudi hospital to Nigeria, against the advice of the medical team attending to him, in the wake of the National Assmbly's declaration of the then Vice-president as acting President. "Alfas" are moslem spiritualists who offer prayers to people in spiritual needs.

chidi opara reports can now reveal that these "Alfas", most of whom come from the Republics of Niger and Chad were hired by the President's first wife, Hadjia Turai Yar'Adua. They are led by a certain "Mahmud" from Borno state. These "Alfas" are lodged at a privately owned property in Lafia, capital city of Nasarawa state, from where they are driven to the Presidential villa every night for midnight prayer sessions and sacrifices on behalf of the ailing President. They are usually conveyed to the villa in different brands of unmarked mini luxurious buses with tinted windshields and are usually driven back to Lafia before dawn.

The success recorded so far in these prayer sessions, chidi opara reports learnt on good authority was what have been fueling speculations about the President's resumption of duty. The President is reported to have recovered enough to sit and discuss for minutes, although his speeches are still largely incoherent. There is also report of occassional relapse into unconsciousness.

It was speculated that the President would attend yesterday's Jumat service at the National mosque Abuja. "At the close of service", according to a citizen reporter, "there was no sign of the President".

At the President's family house in Yar'Adua quarters in Katsina, Katsina state, our network members have severally noticed "Alfas" hired by the President's mother offering prayers and sacrifices for the speedy recovery of Mr. President.
Posted by PublicInformationProjects at 01:48 No comments: