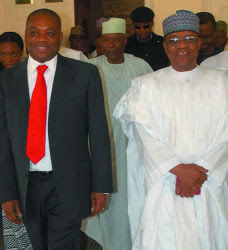 Our network members in Umuahia, capital city of Abia state and Minna, the capital city of Niger state, reported recent secret meetings between emissaries of Orji Uzor Kalu, led by a south east  vocal senator and key aides of the former military President, at IBB's hilltop mansion and at the government house Umuahia. The present governor of Abia state, Mr. Theodore Orji was elected on the platform of the Progressive Peoples' Alliance(PPA), Kalu is the Chairman, Board of Trustees of PPA.

The major problem the IBB/Orji Kalu ticket is facing is former President Olusegun Obasanjo. A contact close to Obasanjo informed chidi opara reports in Abeokuta, capital city of Ogun state, Obasanjo's home state that the immediate past President had "endorsed in principle", the IBB candidacy, but is yet "undecided" about Orji Kalu. Obasanjo and Kalu fell out  during the second term of the Obasanjo Presidency, which made Kalu to quit the Peoples' Democratic Party(PDP), where he was a foundation member to form PPA. Obasanjo is currently the Chairman, Board of Trustees of PDP where IBB and Kalu are hoping to run.

We also learnt that at the moment, the Orji Kalu and IBB foot soldiers are trying hard to sell the Kalu Vice Presidential candidacy to Obasanjo, Kalu's party would however, be the platform if contesting in PDP becomes impossible. "PPA would be our fall back if the PDP option fail", an IBB insider told us in Minna.

Another hard nut would be the not very favourable disposition of the south east governors and the Igbo apex socio-cultural organization, "Oha Neze Ndi Igbo", to the arrangement.

Checks in the south east revealed that governors from the region and "Oha Neze Ndi Igbo" chieftains are not very keen on the Orji Uzor Kalu Vice Presidential ticket. His tendency to always do things to please the core north was cited as a major reason. "Even the Abia state governor is not enthusiastic about the so called IBB/Kalu ticket, he is only playing along to save his political skin", a contact in government house Umuahia informed chidi opara reports.
Posted by PublicInformationProjects at 07:50