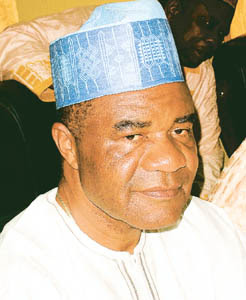 I am constrained to comment on the attempt to destabilize the Peoples Democratic Party (PDP) by people who have never won any election through the party and by people who believe that internal conflicts in a political party can never be resolved in a round table discussion.

It is an acknowledged fact that opposition is the beauty of democracy. Conversely, this opposition either within a political party or outside should be seen as a major ingredient of development within or outside that political party. The PDP is a party made up of various interest groups working towards achieving the collective goal of the party while at the same time targeting group interest. However in the process of achieving this group interest, conflicts are bound to take place and if not managed well, may lead to mistrust and disunity among members of the party. The end result is dis-integration of the party. I stand to be challenged.

The current Chairman of PDP is Prince Vincent Ogbulafor. By virtue of his position, one expects him to be playing a mediating role in solving the problems of the party by applying the “Win-win” solution strategy in resolving the problems of the party. But to the amazement of on-lookers and by-lookers, Ogbulafor have totally proved that he is not capable of resolving minor squabbles in the party. How then can he lead us to win the 2011 elections? I ask this question because Ogbulafor has practically proved to be at variance to the ideals of the PDP. He has equally proved to be not in tune in re-strategizing and re-inventing ways of making the party to be people oriented. Honestly, from my political barometer I can see that Ogbulafor have succeeded in making the PDP to look like a party heading for total dis-integration and disaster. What do I mean?

Ever since Ogbulafor took over as the National Chairman of PDP two years ago, the structures of the party in most states of the federation have been standing on weak legs and therefore in an unstable equilibrium. Under Ogbulafor leadership, PDP lost Anambra State’s peaceful, free and fair governorship election held in February 2010. Under his leadership existing states executives of the party in Imo, Bauchi and Zamfara were illegally dissolved. Under his leadership a man who was just few days old in the party was imposed as the flag bearer of the governorship election in Anambra State without allowing a true and free primary to hold. Under his leadership Nigerians have lost confidence in the PDP led government at the Federal level due to the level of corruption, fraud, deceit and falsehood including uncoordinated behaviour being propagated by Ogbulafor himself.

It is now a notorious fact that Vincent Ogbulafor is the only National Chairman of a political party in Nigeria currently facing corruption charges at the courts as is being facilitated by the Independent and Corrupt Practices Commission (I.C.P.C.) This is a big dent on the image and integrity of PDP. The next question now is; who is Prince Vincent Ogbulafor? From the political angle, Vincent Ogbulafor is a man who has never won any election in his life. He contested the governorship primaries of PDP in 1998 with Dr. Orji Uzor Kalu and lost woefully. He decamped to then APP and contested the governorship election in 1999 with Dr. Orji Uzor Kalu and lost shamefully. Former President Olusegun Obasanjo had compassion for him and re-habilitated him by making him Minister of State for Economic planning from 1999 to 2001. Ogbulafor proved to be a man who wanted to clap with one hand. Obasanjo removed him and made him the National Secretary of PDP in 2001 but Ogbulafor proved to be more corrupt than corruption itself. Obasanjo simply ordered him to resign in 2004.

Two years ago this same Ogbulafor was imposed as the National Chairman of PDP by the conspiracy of serving PDP governors in Nigeria with an agreement of automatic ticket come 2011. Till today Ogbulafor and these short sighted governors have been driving the PDP leadership vehicle from the back seat. No wonder PDP is in crisis. Again what do I mean?

Using Imo State as a platform to explain this PDP crisis, I make bold to state as follows. The PDP in Imo State is standing on two legs namely (1) Alliance (2) New Face .

The Alliance is anchored on the shoulders of Chief Achike Udenwa and Senator Ifeanyi Araraume. While New Face is walking on the shadows of Governor Ikedi Ohakim and Chief Emmanuel Iwuanyanwu. It is a proven fact that the Alliance controls 82% structures of PDP while New face controls 12% structures. The remaining 6% are what I call “siddon – look” structures. The Alliance consists of people who have remained in PDP since its formation in September 1998. It is an acknowledged fact that Alliance consists of PDP members who have played major roles in the growth and development of the party and have held positions both at Government and party levels at various times in the past and vast majority of its members are still holding such positions in the present. On the contrary, New Face consists of people who have oscillated from PDP to ANPP, to UNPP, to AD back to PDP, to PPA and back to PDP, This is what I call gambling and political prostitution” This political oscillation is fully represented by Mr. Ikedi Ohakim. Now due to political interest facilitated by greed as represented by this same person who abandoned his last known party PPA and jumped into PDP in July 2009, crisis showed its ugly head in the once peaceful PDP. A rational mind had expected the National Chairman of PDP to use an “elderly” eye and mind to resolve the problems in Imo PDP. But to the consternation of Imo citizens Ogbulafor joined forces with “the man without a face in Imo State” to cause more problems for the party in the state. But because “Mgbe Amuru Dike Na Mba ka Amuru Ibeya”, the true leaders in PDP withstood the aggression in the party and have been able to control the structures of the party, a new dimension was now introduced. What happened?

Ogbulafor and the National working committee (NWC) of the PDP invited the stakeholders of PDP in Imo State for a meeting at Abuja on Wednesday 21/4/2010. On that day of the meeting, the NWC called it off and shifted it to May 5th 2010. The next day 22nd April 2010, the same NWC in conspiracy with Ogbulafor, Ikedi Ohakim and Emmanuel Iwuanayanwu “suspended” the true leaders of the party in Imo State. The ripple effect of this “suspension” cannot be quantified because its disadvantages are numerous. Although I see the so called “Suspension” as “MBA ANA ABARA AGU”, I still make bold to say that the variables and ingredients that made PDP to loose states like Abia, Anambra, Edo, Ondo, Lagos etc are gradually taking firm root in Imo State. It has even spread its tentacles to Enugu and Ebonyi states. All these are happening within this period of Ogbulafor Chairmanship of PDP. It therefore means that Ogbulafor is not a good political manager of men and materials to achieve positive goals. It should be noted that I long predicted all these in my well published article one year ago entitled “PDP, Ohakim and Automatic Ticket”.

I therefore propound the following solutions to re-activate and re-invent PDP to National acceptance and of course re-integration.

(1) PDP members must re-dedicate themselves to Nigerians as people who are ready, willing and able to serve the public and provide for their welfare.
(2) Bringing back those ideologies for which the party was know for.
(3) Allowing and ensuring internal democracy in the party.
(4) Allowing people with proven records of experience and performance to run and manage the affairs of the party.
(5) Since Prince Vincent Ogbulafor is facing criminal and corruption charges at the court of law, he should resign as chairman so that he can face his criminal case at the courts.

It is only when the above sincere recommendations are implemented that PDP will find its feet as far as free and fair elections are concerned in Nigeria. But if Ogbulafor and the present National Working Committee wants to destroy PDP by imposing people like they did in Anambra State, then PDP should be prepared to lose more states in the forth coming elections. Mgbe Amuru Dike Na Mba ka Amuru Ibeya.