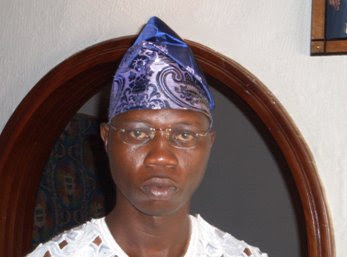 According to information sourced from the OPC website, Adams was born on 30th April, 1970 at Arigidi-Akoko in the present Akoko North-West Local Government Area of Ondo State, Nigeria. He attended Army Children’s School, Oturkpo up to primary 3. When his father was transferred to Lagos,  he finished at the Municipal Primary School, Surulere, Lagos in 1980.

He attended Ansar-Ud-deen Secondary School, Randle Avenue, Surulere before he went for furniture making and interior decorating training, finishing in 1987. He was later employed by an Italian Construction Company, Visinoni Stabilini,  in Apapa, Lagos State. He voluntarily resigned to establish his own furniture making/Interior decoration business. Gani Adams became an active Pro-Democracy Activist in 1992, pitching tent with Campaign for Democracy (CD), He later became the Public Relations Officer of Mushin Local Government Chapter in 1993.

He was the first Deputy National Coordinator of OPC.

OPC, the website stated further, is a non-political organization, "It does not receive financial or material assistance from anybody. OPC’s socio-cultural bent  have continued the perpetuation of Yoruba culture. .

This however, does not exclude the fact that it can act as instrument of checks and balances on the excesses of politicians and other leaders as well".

Gani Adams  who holds the traditional title of "Otunba" and an honourary doctorate degree have come a long way from the days when he was seen as a gang leader.

Dr. kayode Ogundamisi, former Secretary-general of the then  Frederich Fasehun faction of  OPC when contacted by chidi opara reports for comments responded thus; "I wish him well. He has come a long way and contributed his own bit to Yorubaland and Nigeria. Gani is doing a lot to promote Yoruba culture and values through the Olokun festival and the many other socio-cultural festivals his group organizes in South Western Nigeria.

I have had to relate with him first as rivals as I was Sec-Gen of the Dr Frederich Fasehun faction of the OPC but we treated each other with respect and he was always willing to listen to suggestions on how the crisis could be abated. We have maintained cordial relationship since I left the OPC and he has always made it a point of duty to reach out to everyone for suggestions. Not just to those who share his line of thinking but to those who dissagree with him.

It thus gladdens me to know we come from the same Akoko in Ondo State. I certainly wish him the best in his chosen path".

Kayode Ajulo, an Abuja based human rights lawyer and Chairman of Egalitarian Mission Africa has this to say when contacted; "In a society where there is dearth of young persons to attain the height of leadership to inspire the people, Gani Adams have been able to achieve this with threat to his life, his emergence in Yoruba Nation is legendary and I salute his courage, tenacity and his belief. His doggedness is a source of hope to his followers and in recent time he has transformed to an agent of peace.

I use this occassion to acknowledge his firm belief in equity, fairness and justice and also recall his admiration of my legal opinions, thoughtfulness and tactics during the court battles to defend him, Dr. Federick Fasehun and others in the last administration of General Obasanjo. I wish him many happy returns".

Invitation released by the OPC Chief and made available to chidi opara reports stated that a birthday anniversary event will take place on Saturday May 1st  2010 by 11 am prompt at the Blue Roof, LTV Ground, Lateef Jakand Road Ikeja Lagos State.
Posted by PublicInformationProjects at 02:29