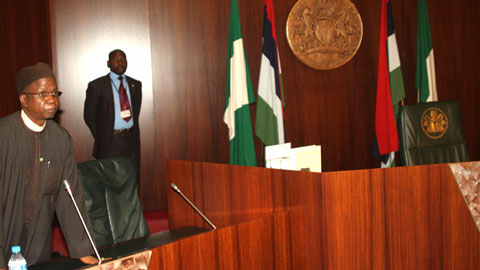 A citizen reporter from Abuja, capital city of Nigeria have just filed in a report that Secretary to the Federation of Nigeria, Mr. Yayale Ahmed have just been nominated as the New Vice-president, by the President, Dr. Goodluck Jonathan.

Details are still scanty. chidi opara reports could not confirm this information at the time of preparing this report.

Post Script: Our investigation have revealed that Yayale Ahmed was actually nominated and the nomination about to be announced, when some influential politicians from the North at the prompting of other contenders, advised the President against such announcement during the seven-day period of national mourning, following the death of former President Umaru Yar'Adua.

It was also learnt that the announcement was to forestall further pressures from the other contenders and their godfathers.

Ahmed however, remain a front runner.
Posted by PublicInformationProjects at 08:50