Article: Why I Invited Obasanjo To Ondo State 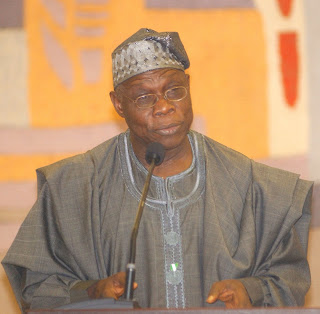 I was a toddler when Obasanjo first became Head of State in 1976, but I met him during my undergraduate’s days at University of Jos, through his lawyer then, Dr. Tunji Abayomi, who rallied some of us as students’ leaders/activists to support Gen. Obasanjo to save his life from General Abacha's clutches, we were like todays' Save Nigeria Group. We were even arrested and detained at Police “A” Division in Jos, I still vividly recall some of this compatriots, apart from Dr. Abayomi, I remember Bunmi Ojo, who is now one of SA of Governor of Ekiti State and I also remember Audu Akpala and one Yemi Anthony. I later worked with Dr. Abayomi's law firm as Head of Chambers in Abuja before establishing this office.

Then I used to visit Gen. Obasanjo in Jos prison with students and to some extend I understood his eccentric manners, so when it was reported that Gen. Obasanjo told some of his fellows in PDP to capture Ondo state by all means and as a stakeholder in the Nigeria polity and proud son of the state, I immediately invited Gen. Obasanjo through our mutual channels for a 3 day tour of Ondo State to enable him see the new developments in the State, interview the common people on the street and find out at the end of the visit, if given another chance he will say the same thing of capturing the State.

And very unusual of him he did not respond to my kind invitation and I therefore found it imperative to respond to General Obasanjo and his co-deceivers in PDP in an unequivocal well reported statement that Ondo State will only be ruled by overwhelming support of the people of the State as the people of the State have resolved never will the elements of deceit and looters of state’s treasury rule the State again.

You see, we need to appreciate General Obasanjo's limited knowledge of the political terrains of the State, we also need to sympathize with him and his co-travelers of their inability to take into consideration the uniqueness of Ondo State, what the State stands for, what the people of the State are known for, our attitudes and unique way of politicking.

The very last time General Obasanjo came to the State, in as much as he tried to harass, threaten, bully and charging that he will unleash EFCC against Dr. Mimiko for daring to contest against his anointed, Dr. Agagu but what came out of the bravado; it turned out to be a blessing in disguise for the people as it spurred them to action to vote overwhelmingly for Dr. Mimiko despite General Obasanjo and Dr. Agagu’s song. "won kere si number wa" (we have outnumbered them)

The likes of General Obasanjo are statesmen of their respective Country, in the olden days, General Obasanjo supposed to be our very own “orisha” (god) that we ought to adore, pay homage to but the man has caused so much embarrassment not only to himself, his family, community but to Yoruba nation, his very wife vilified him, his son accused him of committing a sin against God and law but what else we can do for him than to pray for him, when he was in prison during one of our visit a friend of mine,Stephen Adamu from Adamawa State a Baptist, led General Obasanjo to God, he can still be led to God again but I pray that this should not take place in prison for the second time.

So instead of joining others to abuse General Obasanjo, he should be made to realize that God Almighty love him and Ondo people are special people of God, Ondo people are not pushover, we are elegant and distinct, we are indomitable, irrepressible and egalitarian. We are say-never-die and “unsubduable”. Ondo State is the cradle of progressivism in Nigeria, yes, the home of progressives, Afenifere, hotbed of intellectuals. Recall the roles late Olowo of Owo, Oba Olateru-Olagbegi I and the progenitor of Free Education in Nigeria and former governor of the state, Chief Michael Adekunle Ajasin, played in the formation of Action Group.

I am a student of history, don’t let us be deceived by what the Egbas and Ijebus have been peddling, laying claim to the fact that Chief Obafemi Awolowo is the eldorado of the progressives, while I recognize the great work of the late sage, Awolowo only emerged through the synergy of great personalities of Ondo State. Action Group was not only formed in Owo, Ondo State but in the Chamber of Olowo’s palace.

Chief Reuben Fashoranti, the Afenifere kingpin is also from Ondo State, Chief Olu Yemi Falae, one time presidential candidate, Chief Shehinde Arogbofa, Comrade Baba Omojola, Dr. Frederick Fasehun, Gani Adams, they are irrepressible progressives. Remember also that the most successful legal practitioner, the defender of the people and greatest crusader in Nigeria that I know, Chief Ganiyu Oyesola Fawehinmi was a proud citizen of the state.

General Obasanjo should also be made to know that his party men in Ondo State are failure; appalling and horrific brands that nobody will associate with.

Can you tell me of any good news that has originated from the PDP in Ondo State lately? Please show me any body in Ondo State PDP with unquestionable trait, I am a lawyer and I only deal in facts and law. All our Senators are docile and have turned the National assembly to where they can hibernate soundly to enjoy their gratuities.

Let General Obasanjo show us anybody from PDP that people will follow in Ondo State that is why all of them are running to join Labour Party.