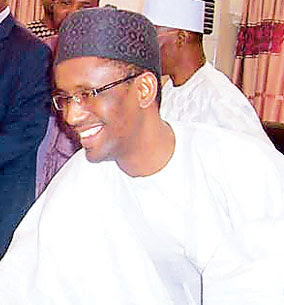 Indications have emerged that former Chairman of  Nigeria's Economic And Financial Crimes Commission(EFCC), Mr. Nuhu Ribadu, who returned from a two-year exile from the United States Of America(USA), last week may be drafted into the 2011 electoral contest as Vice-presidential candidate to the incumbent, Dr. Goodluck Jonathan.

chidi opara reports have been reliably informed that the Olusegun Obasanjo political family is set to use the former anti-corruption Commission chief as a vote catching machine come 2011. The Obasanjo group is made up of amongst others, personalities like; the President, the Minister of Information and Communications, Professor Dora Akunyili, former Minister of the Federal Capital Territory, Mr. Nasir El-Rufai.

A chidi opara reports' network member in Adamawa State, Nuhu Ribadu's home state reported efforts by some of Ribadu's friends to formalize his membership of the Peoples' Democratic Party(PDP), at the ward, local government and state levels. It is not  clear at the time of preparing this report if the formalities have been concluded.

A high level contact at the USA Embassy in Abuja told us that "My country is interested in the emergence of credible young elements in your country's political scene in 2011 and beyond".

A contact at the Babcock University where the former EFCC Chairman received an honourary doctorate degree last weekend confirmed to us that the ceremony was financed by a young billonaire businessman from south western Nigeria known to be an Obasanjo protege.

We can now reveal that Mr. Nuhu Ribadu while on exile made contacts with senior officials of governments of USA, United Kingdom(UK) and Canada amongst others. These officials were reported to have assured him of their support for his future political ambitions.

Aside from the support of the Obasanjo group and the International community, Ribadu is known to enjoy the goodwill of the populace, owing to the public perception of his person as a no nonsense anti-corruption crusader. His tenure as EFCC Chairman is viewed by many as the golden era of anti-corruption fight in Nigeria.

"Nuhu Ribadu is a creation of the radical section of the Nigerian media controlled by his fraternity members", one respondent informed chidi opara reports in Lagos. This respondent refused to explain the fraternity angle.

When asked if the former EFCC Chairman would accept any other position apart from Vice-presidential candidate, a Ribadu confidant in Yola, capital city of Adamawa state told one of our network members, "that would depend on what else would be offered to him".

chidi opara reports investigation however revealed that if Mr. Ribadu fail to get the Vice-presidential candidate slot, he would likely settle for a strategic appointive post.
Posted by PublicInformationProjects at 01:44