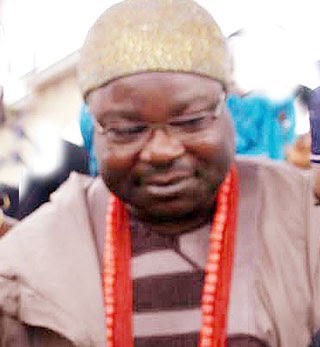 Investigation by chidi opara reports have shown that the dethronement of the Deji of Akureland, Mr. Oluwadare Adesina by the Ondo state administration of Dr. Olusegun Mimiko is political. The former King was last week involved in a public physical fight with one of his queens known as Bolanle, which resulted into his dethronement. Mr. Adesina was subsequently barnished to Owo, a town close to Akure in south western Nigeria.

The former King we learnt is known to be an outspoken person who hates injustice, but whose major fault is his readiness to take to physical fights to press home his points. This fact we learnt was well known to the Kingmakers of Akureland  and in security circles in the state prior to Adesina's assumption of the Kingship

Oluwadare Adesina's undoing we also learnt is his inability to adapt to the fact that there is a change of politcal leadership in the state. "It is not that the former Deji was against the governor, it is just that he did not like the incursion of external forces into the state", an informed Akure resident volunteered to chidi opara reports.

Our investigation further revealed that the former monarch was always at loggerheads with members of the Akure Traditional Council, whom he accused of collaborating with elements from outside to control the resources of the state.

The former King would have been dethroned last year by the Kingmakers but for the timely intervention of the governor. It is however known now that the governor intervened to save Adesina as way of co-opting him into the present political leadership cabal in the state. The former monarch reportedly rejected every overture  by the governor to lure him into the cabal. He was reported to have given a pre-condition that the governor should stop associating with those he described as "colonialists from Lagos".

It was when they could not get him on their side that they set up Bolanle to misbehave so as to annoy Deji", a contact close to Adesina told chidi opara reports in Akure.

The estranged queen is reported to have been promised a princely sum and assistance to relocate to any country of her choice after the humiliation of Mr. Adesina. She is also said to be in an adulterous relationship with a former aide of a former governor of Lagos state.

The former Deji of Akureland who is presently the subject of sponsored attacks by a section of the Nigerian media may be arraigned in court for "assault and battery".
Posted by PublicInformationProjects at 08:00