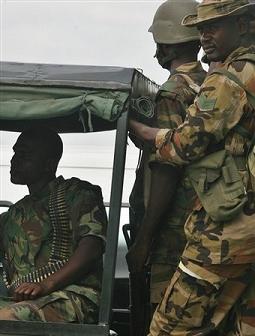 The recent deployment of soldiers of 82nd division of the Nigerian army with headquarters in Enugu to curb kidnapping in the five states of South-Eastern Nigeria by the Presidency have sent alleged kidnap kingpins into hiding.

Kidnapping which have lately defied measures by regular security agencies in the South-Eastern states have been on the increase prompting the recent instruction from the Presidency.

chidi opara reports can reveal that the inability of regular anti-crime agencies to contain the situation was as a result of involvement of these alleged kingpins, most of whom are close to the political leadership of the states in the region.

Police insiders who spoke to our network members in Enugu, Umuahia, Awka and Owerri revealed that the alleged kingpins who sponsor thses kidnaps for political and pecuniary reasons are always on hand to interfere with investigations, State security service (SSS), insiders spoke in similar manner.

"The situation is now different, the instruction is that we should flush kidnappers out of the region and we are going to do that", an officer in the headquarters of the 82nd division told chidi opara reports.

A network member who regularly visits the Jetset Nightclub at Imo Concorde Hotel Owerri, known to be the prefered hangout of these alleged kingpins reported absence of most of them yesterday. These alleged kingpins usually visit Owerri to unwind especially on weekends. They are usually seen at the nightclub with their hangers-on and mistresses.

One regular alleged kingpin whom chidi opara reports have kept under watch since february this year, surprisingly did not show up at the nightclub yesterday, his mistress who is a student of one of the institutions of higher learning in the South-West did not show up either. A contact planted on him informed that he and his mistress were at a private guest house of a Port Harcourt based businessman, who is also a Chieftain of the Peoples' Democratic Party(PDP) in the state. The guest house is close to the five star hotel.

Another alleged kingpin, also under watch, was reported to have fled to Ghana immediately news of the deployment broke.

Investigation by chidi opara reports revealed that most of the alleged kidnappers are former mercenary fighters who disengaged from the Niger delta region, now recruited by these alleged kingpins who provide them with weapons, logistics, protection from the law and "safe houses" during and immediately after operations".
Posted by PublicInformationProjects at 02:14