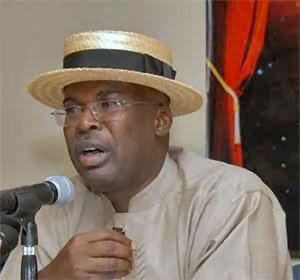 The governor of Bayelsa state, Mr. Timipre Sylva would go to any length to prove to the President, Dr. Goodluck Jonathan that he is a loyalist. Mr. Sylva worked with the late Umaru Yar'Adua cabal to initially prevent Jonathan, then Vice-president from becoming acting President when illness rendered Yar'Adua incapable of performing Presidential duties. Jonathan is from Bayelsa state.

When Dr. Jonathan eventually became acting President and subsequently President, the Bayelsa state governor and his aides became targets of political harassments. The Economic and Financial Crimes Commission(EFCC) visited the state, arrested, detained and later released key government officials on allegation of corrupt practices . To the discerning, the target was Sylva. It was even rumoured that his political party, the Peoples Democratic Party(PDP), would deny him ticket for second term.

Sylva, an astute politician knew where the harassments were coming from and wasted no time in making peace with the President. He, inorder to convince him of his unalloyed loyalty, have used every opportunity to campaign for the President to continue in office beyond 2011.

The Bayelsa state helmsman, who is currently fighting a bitter political warfare with his deputy did more last week when he sponsored a group of ex-militants on a journey to Abuja to demonstrate, ostensibly for the non inclusion of their names in the list of ex-militants entitled to monthly allowances.

Investigation by chidi opara reports however revealed that inspite of the stated objective of the "peaceful demonstration", Timipre Sylva also hoped to use it to show all concerned that if the President is by any means prevented from contesting in the 2011 presidential election, the Niger Delta ex-militants would resume hostilities, this time in Abuja.. The second objective was to potray Mr. Timi Alaibe, the Presidential Adviser on Niger Delta Affairs as incompetent. Alaibe, a native of Bayelsa state is nursing gubernatorial ambition. The first objective we learnt had the blessing of an Ijaw elder known to be very close to the President.

Five strategically placed contacts in Yenagoa, capital city of Bayelsa state, have respectively revealed to chidi opara reports that funds for the hiring of buses to convey the ex-militants to and from Abuja and for other expenses were provided by the Bayelsa state government through an Ijaw activist based in Lagos.

The ex-militants who entered the Federal Capital Territory(FCT) on wednesday, 7th July, 2010 mounted barricades between Abaji and Gwagwalada, they later proceeded to the Eagle square where they terminated their demonstration which lasted between 7am and 2pm.
Posted by PublicInformationProjects at 07:51 1 comment: