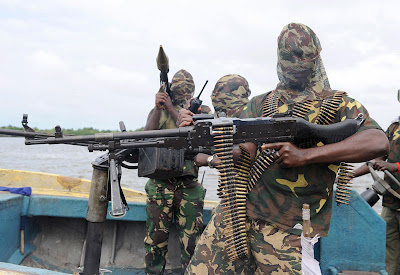 Kidnappers operating in South-Eastern Nigeria are ex-militants who fought in the Oil wars in the Niger Delta region, chidi opara reports learnt on good authorities. These ex-militants we gathered left without the Amnesty Committee documenting their names. As a result of this, they are not entitled to rehabilitation and monthly allowances as stipulated in the Amnesty granted to the Niger Delta militants by the late Umaru Yar'Adua Administration.

Checks by chidi opara reports in Aba, Onitsha, Warri, Yenagoa and Port Harcourt revealed that these Igbo Boys were recruited in Port Harcourt, Warri and Yenagoa., where they were hitherto engaged in legitimate occupations as traders and artisan before their shops were demolished by the respective state governments. Others, we learnt further were ex-convicts who were ostracized by their families, whose only means of survival after release from prison was militancy.

Initially, when these boys were recruited, they were drafted to motor parks and bus stops where they helped officials of transport workers' unions to collect dues from taxi and bus drivers, for this, their godfathers were reportedly, adequately compensated.

While these boys were working at the motor parks and bus stops in the day, they were undergoing nocturnal training in weapons handling and occultic initiations. On completion of training and initiations, they were moblized to the various camps in the Niger Delta creeks as fighters.

When the Oil wars ended, the mindset in the Amnesty committee which presumed that all the ex-militants are of Niger Delta origin led to the Igbo elements not documented.

Checks in ex-militants circles however revealed that these Igbo elements were mercenary fighters whose godfathers were paid in advance before they were mobilized. "When we are surrender, we only takes our boys, those Igbo boys is not our boys, they are hire fighters", an apparently illitrate ex- camp commander told one of chidi opara reports' network members in Yenagoa.

Some of these ex- fighters who had legitimate means of livelihood prior to joining militancy are presently engaged in trading and other legitimate occupations in Aba and Onitsha, while most of the ex-convicts among them went back to kidnapping which they learnt and practised as Niger Delta militants.
Posted by PublicInformationProjects at 08:18 No comments: