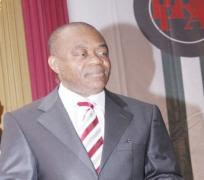 The ambition of Mr. Theodore Orji to rule Abia state for a second term may be in jeopardy, chidi opara reports learnt during the week. Mr. Orji who won the Abia state gubernatorial election in 2007 on the platform of Progressive Peoples Alliance(PPA) to become governor of the state also known as "God's own state" recently defected to the All Progressives Grand Alliance(APGA). Shortly after he joined APGA, his predecessor and former political godfather, Mr. Orji Uzor Kalu joined the ruling Peoples' Democratic Party(PDP), taking along with him the entire PPA rank and file. The governor is also presently making desperate efforts to join PDP.

Mr. Theodore Orji's desperation to join PDP, we learnt authoritatively is as a result of a report he received in which moves being made by his erstwhile political godfather to use the PDP national and state structures to abort his second term ambition was revealed.

According to a contact who is privy to the report,  former governor Orji Uzor Kalu have been sending emissaries to PDP chieftains in the state, pleading that he should be allowed to contribute to the development of the state once again through PDP. He is also pledging to support any person these chieftains favour as PDP governorship candidate in the state, "as long as the person is not Theordore Orji".

Mr. Orji Uzor Kalu, who has for now abandoned his earlier plan to run with rtd. general Ibrahim Babangida as Vice-presidential candidate in the 2011 election have also sent emissaries to the President, assuring Mr. President of his loyalty and support if he would contest next year's presidential election.

chidi opara reports' network members in Umuahia and Abuja reported that the kalu moves are beginning to register some impacts as the initial opposition to his joining PDP in Abia state is easing off.

Governor Theodore Orji's move to join PDP is however being resisted by the state party chieftains because it is hinged on his second term ambition which members of his kitchen cabinet think APGA cannot gurrantee. The former national chairman of PDP, Mr. Vincent Ogbulafor is however, favourably disposed to allowing Theodore Orji to run on PDP platform, but almost all the state party stalwarts are vehemently opposed to this idea.

We also learnt that in the meantime, negotiations between the Abia state governor and PDP national leadership have been suspended to allow the party to consult extensively with Abia state party chieftains. Some PDP insiders in Abia state informed us that it would not be possible to hand over the gubernatorial ticket of the party to the governor so easily. "Let him join as an ordinary member if he wishes to be a member", one PDP support in Aba suggested.
Posted by PublicInformationProjects at 09:42 No comments: