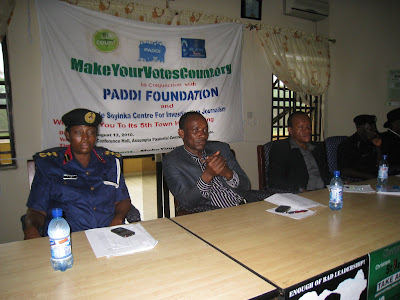 Stakeholders in the quest for credible elections in Nigeria have lent their support to efforts by MakeYourVotesCount (MYVC) to get Nigerians actively involved in the electoral process. Government agencies -- Civil Defence Corps, Police, and National Orientation Agency – central to credible elections in the country commended MYVC for its bold effort to ensure that Nigerians register to vote in the 2011 election and ensure that their votes count.

Representatives of these agencies spoke at the just concluded south-east zonal town hall meeting organized by MYVC held at Bishops’ Conference Hall, Pastoral Centre, Owerri, Imo State. The meeting was the fifth in a series of town hall meetings initiated by MYVC to guard against electoral fraud in 2011.

Commandant General of the Nigeria Security and Civil Defence Corps, Dr. Ade Abolurin, who was represented by the Deputy Commandant General, Patience Agbiki, said the NSCDC was delighted to be part of efforts aimed at enlightening Nigerians and creating awareness about the need for Nigerians to ensure their votes count during elections. According to Dr. Abolurin, the essence of democracy is that people participate and their participation is respected. The basic rule of the game must be upheld, election must be free, fair and credible, he added.

Dr. Abolurin reiterated the Corps’ commitment to free and fair election, adding that the meeting should not be seen as any other gathering whose outcome is swept under the carpet. It should be seen as the beginning of the new dawn leading to the actualization of credible election in the country. It should have a positive impact on all Nigerians and the message should be passed to the youth to know that they have a stake in governance. Dr. Abolurin said the Corps was willing to partner with MYVC to achieve its objectives.

DSP Samuel Eke, representing the Imo State Police Commissioner commended MYVC and highlighted the role the Nigeria Police and assured that the 2011 general elections will be free and fair in Imo State, as his men are undergoing training and re-training specifically for that.

Mr. Mike Opara, Director, National Orientation Agency, (NOA), Imo State said just like MYVC, the NOA was also mapping out strategies in reaching people at the grassroots. Mr. Opara, however, condemned what he called the high concentration of sensitization in urban centres, while neglecting those in rural communities. He said the issue should be a concern for civil society organizations working in the area of political education.