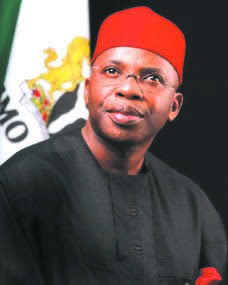 Surrounded by intra-party problems, the governor of Imo state of Nigeria, Mr. Ikedi Ohakim may change political party again. Ohakim who was elected on the platform of Progress Peoples Alliance(PPA) in 2007 defected to Peoples Democratic Party(PDP) shortly after.

If the Imo state Chief Executive thought that the defection would bring political succour to him, it has now dawned on him that his political problems are far from over.

chidi opara reports learnt from insiders in the Imo state  inner political circle that the main bone of contention was Ikedi Ohakim's refusal to submerge his political structure which goes by the name; "New Face" into the state party structure. This refusal, according to an Ohakim insider is because of the refusal of the governor's major opponents, Mr. Achike Udenwa, Ohakim's predecessor and Mr. Ifeanyi Ararume to equally submerge their jointly owned political structure known as "Alliance" into the state PDP structure.

The governor, chidi opara reports learnt further also refused to heed the directive of his party's national leadership not to conduct primary election to elect candidates for the August 7th 2010 local Government election untill the problems in the state chapter of the party are solved. The governor is also alleged to have ignored a case before Justice Goddy .I. Anunihu of the Owerri High Court to this effect. There is also a pending complaint against the governor at the PDP national secretariat.

Unconfirmed information at our disposal has it that Mr. Ikedi Ohakim would join the All Nigeria Peoples Party(ANPP) with the recently elected local government Chairmen, Councillors and the unelected Coordinators of development areas, all members of  "New Face", before the 2011 elections.

What chidi opara reports can confirm is that the Imo state governor had secret talks with ANPP, Action Congress of Nigeria(ACN) and Labour Party(LP) officials respectively to explore the possibility of actualizing his second term ambition on the platform of any of these parties if PDP refuses to offer him ticket. There were however no agreements reached. These talks, we learnt from an Ohakim insider were "just fallbacks".

A network member in Owerri who has kept tabs on the governor's "New Face" political structure for sometime now reported that the talks which have been suspended "to watch developments in PDP", would be restarted if there is any slight indication that PDP would not present Ohakim as its candidate for the 2011 gubernatorial election.
Posted by PublicInformationProjects at 01:15 4 comments: