News Report: Rivers State Governor May Not Get Second Term 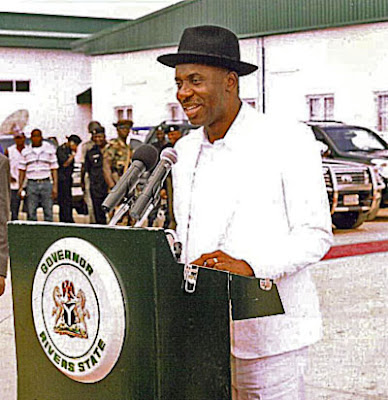 The insistence of governor Chibuike Rotimi Amaechi on the demolition of water fronts in Port Harcourt, capital city of oil rich Rivers state, Nigeria, which have pitched him in political battle with indigenes of the riverine area may cost him his second term ambition, chidi opara reports learnt. Amaechi is an Ikwerre from the upland area.

Over the years, the riverine indigenes have regarded the water fronts as their foothold in the capital city. The Ikwerres however, have insisted on ownership of these water fronts which they claim was given to the riverine people as fishing ports on temporary basis.

When Mr. Amaechi took over the administration of the state in October 2007, he suspended a planned demolition of water fronts. This suspension doused the tension generated then by the planned demolition, but on consolidation, the Amaechi administration revisited the suspended exercise. At the moment, some water fronts like the Njemanze street water front have been demolished, others where government bulldozers have not yet visited are those whose inhabitants ran to the courts. The governor have however, vowed to demolish all water fronts.

This vow is what his political enemies based in Abuja, led by his erstwhile political godfather and a former governor of the state, Dr. Peter Odili is using to mobilize influential riverine indigenes to stop the governor's second term bid.

The latest of such recruit is the wife of the President, Mrs. Patience Goodluck, an Okirika indigene. The Okirikas are the main inhabitants of water fronts in Port Harcourt. On her recent visit to the state, Mrs. Jonathan complained about the marginalization of her people.

Checks by chidi opara reports revealed that the first lady's complaint was the climax of a long held anger. Insiders in the Abuja based political group whispered to us that a plan to present Mr. Celestine Omehia, Amaechi's cousin, as the Peoples' Democratic Party(PDP) governorship candidate for 2011 election with Dr. Abiye Sekibo, an Okirika as his deputy is at advanced stage. This plan reportedly have the support of Mrs. Jonathan. It is not known if the President is privy to this plan.

An insider in the Amaechi political camp boasted to a chidi opara reports network member, "no shaking, we are here". Further checks have also revealed that the  Chibuike Rotimi Amaechi second term plan is on course.
Posted by PublicInformationProjects at 01:32 No comments: