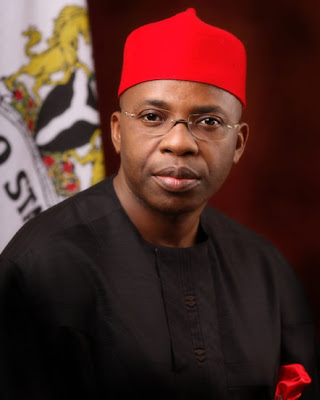 I would not bother to join issues with “Owerri Power Club”, bearing in mind that the signatures of the two individuals mentioned above were superimposed on the said advertorial. The address of the club given as “Plot 475 Trans Egbu Owerri – Imo State” does not exist, after a careful investigation, I also discovered that the advertorial was written by Mr. Ethelbert Okere, Special Assistant to Governor Ikedi Ohakim on Documentation, but he chose to use the names of Chief Paul .C. Nnawuchi and Prince Azu Uwandu as signatories.

It should be noted that the assault on Rev. Fr. Eustace Okorie confirmed that Mr. Ikedi Ohakim and his government have no respect for anybody or institution in the state. The scandal that followed this assault on Rev. Fr. Okorie can be equated to the assault on this writer by Ikedi Ohakim himself in his Office at gun point. As a face saving strategy, Ohakim ran away from Imo State, exactly what he did when he assaulted this writer.

On paragraph 8 (eight) of the advertorial, Mr. Ethelbert Okere wrote inter-alia “it is even sheer wickedness to insinuate that Governor Ikedi Ohakim has been brutalizing Imo indigenes since 2007 that he took office. In the case of the carefully fabricated Mr. Ikenna Samuelson’s story which is now a reference case, no Chief Executive can stomach the youth’s tissue of lies which he bandies on internet and pages of newspapers with reckless tact and also Mr. Maximus Uba’s who started the opposition though with reason has now abandoned the camp of the opposition and has since embraced reason after the supreme court judgment”. Mr. Ethelbert Okere is fond of hiding under other people’s names and groups to launch bare-faced lies with the intention of deceiving the reading public.

By Ikenna Samuelson Iwuoha
Posted by PublicInformationProjects at 04:48 No comments: