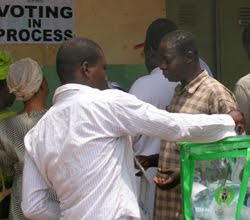 Democratic Peoples’ Party (DPA) have accused the Lagos State Independent Electoral Commission (LASIEC) of keeping political parties in the dark about two bye-elections slated for later this month.
The party complained that less than 10 days to the polls, LASIEC had not deemed it appropriate to send notification about the polls to DPA and other parties.
One bye-election will hold in Lagos Island Ward A1 in respect of a deceased Councilor originally elected on the platform of the Action Congress (AC), while another takes place in Ikorodu. Both polls have been reportedly fixed for September 18.
“We are tempted to say, ‘Here we go again,’ because this is just typical of the divide-and-rule posture that has characterized the operations of LASIEC in Lagos State. This kind of partiality robbed opposition parties of victory in past elections organized by LASIEC,” DPA said in a statement by its Director of Publicity, Felix Oboagwina.
Rising from a meeting of its Lagos State Executive Council in Yaba area on Tuesday, DPA said it only learnt on that day that two bye-elections had been scheduled in the state.
The party said LASIEC’s behaviour gave the impression it had written off other participants, something the party said could not guarantee a free and fair election.
“It is disheartening that LASIEC failed to send the notification of the election to DPA’s known address at the party’s Lagos State Secretariat in Yaba, and instead sent second-hand information through some faceless officials in the local government to advise inappropriate party officers to pick up nomination forms,” the party said. “Even now, we do not know where the bye-election will hold in Ikorodu.”
The last time Lagos witnessed a bye-election was last year when Mr. Okanlawon Soniyi of the Peoples Democratic Party (PDP) won the Ibeju-Lekki Federal Constituency bye-election, after the disqualification of an Action Congress (AC) Member of the House of Representatives.
“We had hoped that with the preparations in top gear for the crucial 2011 polls, all electoral agents would be on deck, reflecting an attitudinal change that everybody has agreed will wipe away our past shame of fraud-infested elections. Unfortunately, LASIEC appears caught in its web of its old habits. And it wants to continue to do bad business as usual,” DPA said.
FELIX Oboagwina
Director of Publicity,
Lagos state DPA
Posted by PublicInformationProjects at 09:36 No comments:

News Report: Nigerian President May Not Contest With Deputy 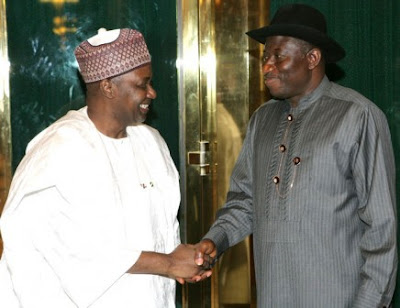 Despite reports that Nigerian President, Dr. Goodluck Jonathan would contest the 2011 presidential election with his deputy, Mr. Namadi Sambo, indications are that the running mate slot is still open and may be used for bargaining.

Presidency insiders have revealed to chidi opara reports that the President's recent meeting with his party's governors whose agenda was his presidential ambition carefully omitted the name of his potential running mate.

Checks in northern states, the Vice-president's home zone revealed that Sambo's political clout would not be enough to sway the north into giving the President the required votes in 2011. Northern political leaders are insisting on the zonning policy of the ruling party, which stipulates that it is the turn of the region to produce the President. Jonathan is from the south.

Part of the recommendations of the Goodluck Jonathan political think tank, chidi opara reports learnt is that a northerner with enough politcal clout to substantially contain the anti-Jonathan campaigns of northern politcal godfathers insisting on a President from the region should be chosen. The President is said to be considering this recommendation, "but would prefer the Vice-president for his loyalty".

The names of Muktar Shagari, Deputy governor of Sokoto state and a son of former President Shehu Shagari, Bukola Saraki, Governor of Kwara state and a scion of the Saraki political dynasty, Aliyu Gusau, retired Army general and former National Security Adviser are also on the card.

Contacts close to the Vice-president however informed chidi opara report that he is aware of this plan and would play along. According to one contact, "as long as it will ensure victory for our party".
Posted by PublicInformationProjects at 02:07 No comments: