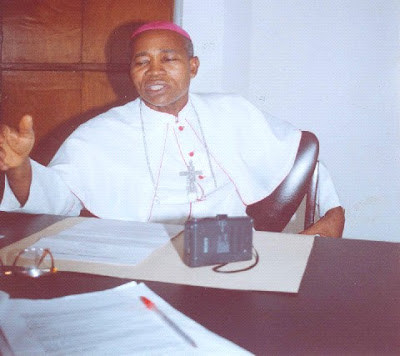 
The Roman Catholic community in Imo and Abia States on Friday September 10th, 2010 did a protest march against bad leadership. The Bishops of Owerri Ecclesiastical Province comprising the Dioceses of Owerri, Orlu, Okigwe, Ahiara, Aba and Umuahia led their faithfuls to a one-day prayer procession in Owerri, the capital city of Imo State .

The Catholic faithfuls numbering over 200,000 began the prayer procession at “Villa Maria” (St. Mulumba Catholic Church) along Wetheral Road by 8.00am and terminated at the Assumpta Cathedral at about 12:30pm.

The faithfuls wore black and purple clothes depicting signs that evil have enveloped the two states. During the prayer procession, the Roman Catholic faithfuls called on God to intervene to free the people from bad leadership,

The Roman Catholic faithfuls had gone into “novena” mass and rosary prayer demonstration earlier, following the arrest and detention of Rev. Father Eustace Okorie recently by the Ikedi Ohakim government. The Ohakim government also demolished several churches in 2007.
Posted by PublicInformationProjects at 07:51 No comments: